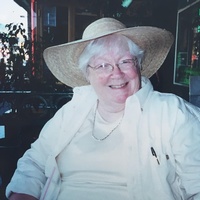 Judith C. Giessel (Conlon), 80, long time resident of Wheaton, IL and Door County, WI, died in her sleep on Sunday, June 10, in her home in Wheaton IL. Her primary focus in life was her family of eight adults and 11 grandchildren. They are husband, Carl; her daughters and their husbands, Amy Jackson (Troy), Carrie McCunn (Greg), Catherine Woodard (Greg) and Rebecca Giessel; and her grandchildren Stephanie, Kyle and Sean Jackson, Baillie, Ashlie, Taylor and Karsyn McCunn, Jared and Jessica Woodard and Abigail and Sydney Dannenbring. She is also survived by numerous aunts, uncles, nieces, nephews, sisters and brothers-in-laws.

Judy also cared deeply about her profession as a family nurse practitioner. She graduated from Northwestern University with a BS in nursing in 1961, worked initially at Passavant Hospital as a night supervisor, and graduated in the late 1970’s from the University of Illinois, Chicago with a Masters in Nursing, Family Nurse Practitioner. She avidly perused effective use of her family nurse practitioner skills at Lutheran General Hospital in Park Ridge, IL and Schaumburg Family Practice. Judy also worked in numerous hospitals in northern and western suburbs of Chicago, taught nursing at Elmhurst College and College of DuPage and worked in hospice and in DuPage County Health Department.

Her other interest included dogs. She had eight sequentially over the last 56 years, the last three being Havanese rescue dogs. Judy cooked with pleasure, lovingly sewed children’s clothes and quilted (was a member of Door County’s Trillium Quilt Guild), exercised in pools with Door County and western suburb friends and traveled extensively. She arranged a trip to the Galapagos Islands for her entire family and a safari in Tanzania for her and Carl. Judy loved Door County and spent time in each of the last 50 years on the shores of Sand Bay.

The family requests that in lieu of flowers donations can be made to the Havanese Angel League Organization for Rescue (HALO) or Gary United Methodist Church.