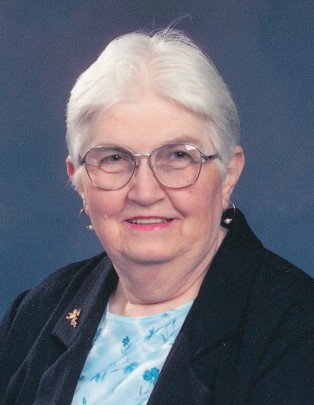 June was born in Sheboygan, Wisconsin, the daughter of Ellsworth and Doris (Hanson) Anderson. She lived in West Allis as a teenager and attended West Milwaukee High School for two years. Her family moved to Sister Bay, and she finished high school at Gibraltar School in Fish Creek, graduating in 1952.

While attending Gibraltar, she met her husband, Charles Leon Jarman.  They were wed on September 12, 1953, at Immanuel Lutheran Church in Baileys Harbor. Together they operated Jarman Excavating and Trucking, later becoming Jarman, Inc. They resided in Fish Creek together all their lives and had four children. They enjoyed camping and snowmobiling and mostly just each other’s company. They had been married for 49 years, until Charlie’s passing in 2003, not quite making it to their 50th anniversary.

June was a member of St. Paul Lutheran Church in Juddville. Over the years, she taught Sunday School there and led Cub Scouts when her boys were of that age. She was employed for a time by her father at MasterFreeze in Sister Bay. She was a waitress at the C&C Club so she could raise their family during the day and Charlie could watch the kids at night.  She worked many years for Mary Jane (and Dana while he was alive) Von Schrader, fondly called Vonnie by June. She also had a short stint as a receptionist for the Gilster Company as well as food services at Good Samaritan Society–Scandia Village. Later in life, she volunteered at Bargains Unlimited.

June’s life will be honored with a funeral service on Tuesday, July 16, 11 am, at St. Paul Lutheran Church in Juddville, with Pastor Frank Kauzlarich officiating. She will be laid to rest next to her husband and son.

Visitation for family and friends will be Monday, July 15, 4-6 pm, at Casperson Funeral Home in Sister Bay. There will be no visitation prior to the funeral service on Tuesday.

“Our family would like to thank the staff at Good Samaritan Society–Scandia Village, at both Woodview and Skilled Nursing, for the past several years that June was in their care. Also, Pastor Frank Kauzlarich for his many visits and for the congregation of St. Paul that continually prayed for June. We know so many folks looked in on Junebug from time to time, and we will forever hold you in our hearts.”

Expressions of sympathy, memories and photos of Junebug can be shared through her tribute page at caspersonfuneralhome.com.