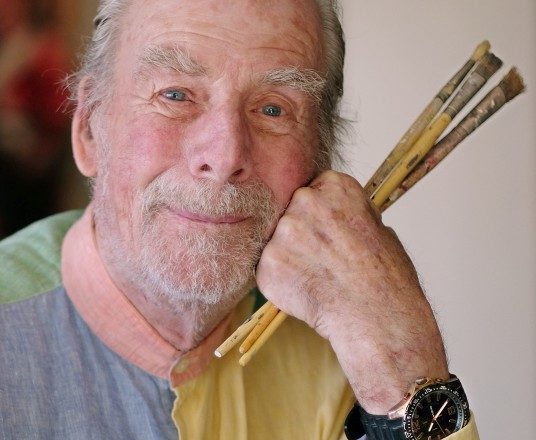 Karsten Topelmann died peacefully on February 13th at his home, surrounded by his daughter, son and daughter-in-law. A resident artist of Ephraim since 1971, he contributed to the Door County community and touched many through his artwork.

Karsten was born in Munich, Germany, and knew he wanted to be an artist from an early age. He studied at the Royal Academy of Art in Munich, and travelled and painted throughout Europe. After immigrating to the United States in 1955, Karsten worked as a designer and art director in Davenport, Iowa and later in Chicago. He married fellow German artist Ellen Sprogøe and together they had three children. After vacationing for many years in Door County, they bought property in Ephraim and opened the Hanseatic Art Gallery in 1972. Together with Ellen’s determination and optimism, they worked hard to make the dream of being independent artists and gallery owners come true.

Karsten’s love for the beauty of Door County inspired most of his artwork and he painted prolific scenes capturing Door County wildflowers, lighthouses, pastures and barns. His most beloved motif was the village of Ephraim. All seasons and views of Ephraim were captured in his numerous portrayals of the “Pearl” of Door County.

During the cold Door County winters, Karsten and Ellen travelled the world and for almost 20 years, they lived and painted in Rothenburg ob der Tauber, Germany and on the Island of Tenerife in the Canary Islands, Spain. They made many dear friends in these various destinations, but Ellen and Karsten always came back to Ephraim, where they enjoyed the close-knit community. In 2000, they returned year-round to their beautiful house with their favorite view overlooking Eagle Harbor and Horseshoe Island. A special honor in Karsten’s life was to be the Village Fyr Bal Chieftan in 2003.

Karsten’s illustrious artwork and gentle spirit will live on in the hearts and homes of so many who have visited the gallery and who have acquired his works over the past 50 years. He was a wonderful husband and father and enjoyed sharing his artistic inspiration with many friends and young aspiring artists. Creating art was his life force, and he painted every day right up until his passing.

Karsten was preceded in death and his daughter Tanja (1961-1983) and by his wife Ellen (1926-2016). He is survived by his daughter Lisa (husband Mark Weder, sons Elliott and Miles) and son Lars (wife Monique McClean and sons Karsten and Finn).

A gathering is planned for a later date.

In lieu of flowers, the family would like very much that you toast Karsten (or Prost as he would say) and share with each other your memories of him. Donations to the Ephraim Historical Foundation are also appreciated.

The family would like to thank Unity Hospice for their great care and compassion.

Casperson Funeral Home & Cremation Services in Sister Bay is assisting the Topelman family. Expressions of sympathy, memories, and photos of Karsten may be shared with his family through his tribute page at www.caspersonfuneralhome.com.