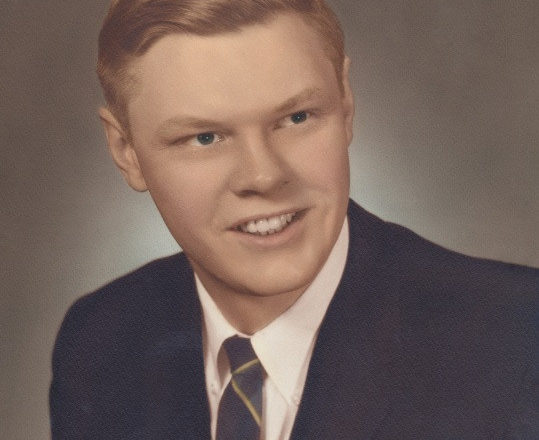 L. (Lewis) John Fletcher died at the age of 78 as the result of cancer. John was born at St. Luke’s Hospital in Kansas City, MO on August 22, 1943, the third of four children of the late Maxwell K. Fletcher, Jr. and Carol (Pettit) Fletcher. His father purchased Hotel du Nord in Sister Bay and the family arrived there from Kansas City in the middle of a snowstorm on January 4, 1954.

John attended Wildwood Grade School and graduated from Gibraltar High School, Class of 1961. He was blessed with many lifelong friends and fond memories of his days at Gibraltar. He kept in touch with many of his classmates his entire life. John graduated from Drake University with a degree in accounting in 1965 and a JD from Drake Law School in 1968. He also completed the Advanced Management Program, Harvard Graduate School of Business in spring of 1990.

On June 27, 1969, John married Leslie D. Sabo at the Glenview Illinois Community Church. He is survived by her; their two children, John B. and Kirsten R. Fletcher; sister, Laura, and brother-in-law, John Lijewski; sister-in-law, Ardis Fletcher; his two precious granddaughters, Lauren and Miranda Fletcher; nephews, nieces, and cousins. In addition to his parents, he was preceded in death by his older brother, Maxwell K. (Keyes) Fletcher III and older sister, Pamella Julianelle.

John spent his entire career as a corporate attorney beginning with International Harvester, then Dart & Kraft (Kraft Foods, Duracell, Tupperware, etc.). In 1986, Kraft spun off its non-food business into an NYSE traded company, Premark International Inc., where he served as V.P. & Assistant General Counsel for many years. John was admitted to practice by exam in Illinois, Wisconsin, and Iowa and before several federal courts including the U.S. Supreme Court. A highlight of his career was a legal presentation at The White House in 1996. After retirement, John was a director of the Sister Bay Historical Society. John felt he was blessed with a “story book” career. His mentor at Harvester told him, “Every day was like Halloween: you never know what’s going to show up at your door.” John embraced this philosophy and pursued his career and numerous hobbies with great interest and an infectious sense of humor.

A funeral service to honor John’s life will be held at the Sister Bay Moravian Church on Friday, August 5, 2022 at 1:00 p.m. He will be laid to rest in the church cemetery following the service.

Visitation for family and friends will be held at the church on Friday from 12:00 p.m. until the time of service. Masks are required for all in attendance, regardless of vaccination status.

Casperson Funeral Home & Cremation Services in Sister Bay is assisting the Fletcher family. Expressions of sympathy, memories, and photos of John may be shared with his family through his tribute page at www.caspersonfuneralhome.com.