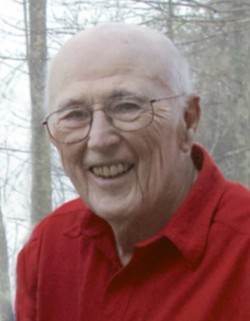 Larry Eugene Harvell died surrounded by his family on April 24, 2021 at the age of 93, on Washington Island, Wisconsin. He faced a diagnosis of cancer in the late spring of 2020, and, as he faced all of life challenges, addressed this one with courage, strength and with an unwavering positive attitude.  Despite his recent discomfort, Larry carried on with a whirlwind of activity and only begrudgingly slowed down when his body required him to rest.

He was born June 29, 1927 in St. Louis, MO, the son, of Maynard E. and Louise Beulah (Bowman) Harvell. Larry enjoyed a wonderful childhood having been blessed, as he often said, with two mothers, after his father, Maynard, was unable to take on the responsibility of caring for Larry and his sister, Barbara, upon the illness of their mother, Louise. He was raised in Litchfield, Illinois by his paternal grandmother, Dena, and his great-aunt and great-uncle. Larry grew up attending Litchfield United Methodist Church and graduated from Litchfield High School. Larry loved telling stories of his upbringing and of the many adventures he had at the local swimming hole and with his friends, especially Bert Arnold.

He enlisted in the United States Navy in June of 1945 at age 17. As an enlisted seaman, Larry was assigned to a troop ship headed to Okinawa in the western Pacific. Upon arrival, he was further assigned to a Landing Ship Tank (LST) transport. Larry then served as third-class storekeeper. He continued serving as storekeeper aboard three different LSTs, shuttling materials to various ports in Japan, for approximately the next five months. When his duty assignment came to an end, he then helped decommission several of those same ships.

Following his discharge from active duty, Larry entered the Naval Reserve in Chicago, Illinois and began a career in sales.  In Chicago, he met his first wife, Lois Jean (nee Laase), on a blind date.  Lois helped Larry learn the ways of the big city and Larry introduced Lois to the outdoors, including hunting, boating, fishing, and camping. They were united in marriage in Chicago on June 10, 1950 and honeymooned in the boundary waters of Minnesota.  Soon after their marriage, Larry was called back to active duty during the Korean War.  Ready to be shipped out to Korea, he was pulled off the troop ship in Pearl Harbor based on his storekeeping and typing skills and assigned to the Naval Supply Center for the balance of the war.  Lois joined him in Honolulu a few months later. They were able to live off base in nearby Waikiki and, once again, enjoyed many adventures including learning to fly, a lifelong dream of Larry’s.

Once his active duty during the Korean War ended, Larry and Lois returned to the Chicago area. He worked as an industrial engineer for Bell and Howell and later for the Prudential Insurance Company for over 30 years and achieved Chartered Life Underwriter (CLU) certification. They moved to Deerfield, Illinois after they had their first son, Bret and two additional children, Glen and Jean.

Larry and Lois loved to travel and purchased a pop-up camper, taking it all over the United States with their family. In the late ‘60s, one of Larry’s agents, Bob Steffen, invited Larry to come up to Washington Island. Captivated by the beauty of the island, Larry and Lois purchased lakefront property on the East Side in 1970. Upon retirement in 1988, they built a home and spent their summers on the island while wintering in Sarasota, Florida. After over 40 years of enduring Chicago winters, Larry fulfilled another lifelong dream of getting away from snow. They were fortunate enough to travel extensively, including trips with friends to Australia, New Zealand, Scotland, England, and all through North America.

Larry and Lois enjoyed 64 years of marriage until her passing in 2014. He continued to split his time between the island and Sarasota. He then met fellow Islander, Linda Jane (nee Dale) Henning, who also lost her husband, Ken. They began a friendship, leading to their marriage in May of 2018. It is exceptional to find love once in your life but to have found love twice, is truly a blessing, and Linda was an incredible blessing to Larry.

Larry will be missed by his wife, Linda; and his three children, Bret (Kathy) Harvell, Glen (Shelly) Harvell, and Jean Wright; three grandchildren, Andrew and Emily Harvell and Dalton Wright; special family members Andrea Henning and Dennis Wright; as well as his nieces and nephews.

He was preceded in death by his parents; first wife, Lois; sister, Barbara (Walter) Molash; and other relatives.

Larry will be honored with a celebration of life this summer.

Memorials may be given in his name to the Washington Island Veterans Memorial Fund.

“Our family would like to thank the caregivers of Unity Hospice, as well as the many neighbors and friends throughout the years.”

Casperson Funeral Home & Cremation Services in Sister Bay is assisting the Harvell family. Expressions of sympathy, memories, and photos of Larry may be shared with his family through his tribute page at www.caspersonfuneralhome.com.