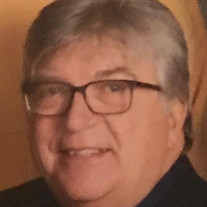 He was born in Poynette, Wisconsin as the oldest son of Ronald and Joyce Ohnesorge.

He was a graduate of Marshfield Senior High School’s Class of ’72. Larry served our country in the U.S. Army and participated in an Honor Flight this past October.

Larry had a variety of careers, including with the City of Sturgeon Bay, Sturgeon Bay shipbuilders and finished his career at Procter & Gamble, retiring in 2015.

Larry found the love of his life, Melody, and they married June 2, 2006. He had a larger-than-life personality and never met a stranger. Larry was a member of the Sturgeon Bay Jaycees and the American Legion. He was an avid fisher, hunter and musician. He especially enjoyed times spent at the camper in Baileys Harbor and was a fan of all the Wisconsin sports teams.

Services will be announced later.

The family would like to extend a special thank-you to Unity Hospice and Pastor Joshua Errer of Faith Lutheran Church.

In lieu of other expressions of sympathy, please direct donations to Unity Hospice in Larry’s name.

A tribute page is available at simplycremationgb.com/obituaries.