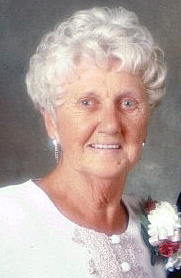 Laura Reeves Stratton, 92, of Sturgeon Bay, WI, and formerly of Freeport, NY, passed away Sunday, June 5, 2016 at Ministry Door County Medical Center in Sturgeon Bay with family by her side.

She was born March 14, 1924 in Harbour Buffett, Newfoundland, Canada, the daughter of Arthur and Ada (Morash) Collett. Laura attended St. John’s College and then served in the Royal Canadian Air Force from 1943 until 1944. Upon the completion of her military service, she worked in the public works office on the United States Naval Air Station Base in Argentia, Newfoundland. There, she met John Frederick Stratton, her future husband. They were married on April 8, 1947 in a double wedding ceremony with her older sister, Dorothy who married Harold Gorman, at St. Paul’s Episcopal Church in Harbour Buffett.

John’s Naval career took them to many places. Their first home was in Freshwater, Newfoundland and also where their first son, Charles was born. Then, a transfer brought them to Pensacola, FL, where their second son, Phillip, was born. They were later stationed in Pittsburgh, PA, during which they lived in Export. Their final move as a Navy family took them to Naples, Italy.

In 1963, their family settled in Freeport, Long Island, NY, where John’s family lived. They moved to Sturgeon Bay in 1985 to be near their son, Charles, and family. Some time later, their younger son, Phillip, moved to Sturgeon Bay. Laura and John enjoyed several winters in Florida.

Laura liked working on crossword puzzles, tending to her flower gardens, and playing music on her Yamaha organ. Her passion was baseball season, and she loved cheering on her favorite team, the New York Yankees. Laura and John always enjoyed their visits back home to Newfoundland by her family. They shared almost 66 years of marriage together. John passed away March 1, 2013.

Thank you to the doctors and staff at Ministry Door County Medical Center for the wonderful care Mom received while in the hospital. A special thank you goes out to Mary Bink for the extra time spent just enjoying music with Mom during her cleaning visits.