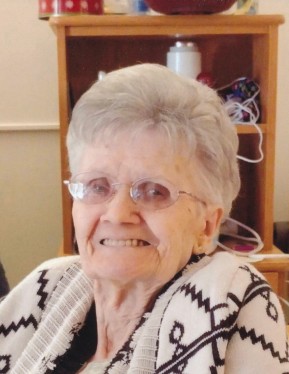 On January 29, 1948, she married Robert R. Moyle in Calumet, Michigan, at Calumet Methodist Church. They had four children while in Calumet: Allan, JoAnn, Vernon and Richard. They operated the Chatterbox Restaurant. In 1956, they moved to Milwaukee for work and had two more children there: Vicki and Tammy. Known for her artistic decorating abilities, LaVerne worked in some of Milwaukee’s bakeries, including Grebe’s, Arlans and Crestwoods.

A few years after their divorce, LaVerne met and married Ed Blasier on Oct. 20, 1975. He was working at Harley-Davidson. Ed was raised in Sturgeon Bay, so he and LaVerne moved to Sturgeon Bay in 1975 with her two youngest daughters, Vicki and Tammy. Ed worked at Palmer Johnson until his retirement in 1989. Ed Blasier died March 24, 2003. Robert Moyle died in 2000.

After moving to Sturgeon Bay, LaVerne worked at Knaapens Bakery and also at the Office Lounge in Sturgeon Bay as a waitress until it burned to the ground. For her remaining working years, she was a familiar face at the Sturgeon Bay Dairy Queen until she retired in 2000 at age 70.

LaVerne enjoyed reading, being on her tablet, corresponding with family and friends.

Relatives and friends may visit at Huehns Funeral Home in Sturgeon Bay on Friday, Aug. 30, 4 pm until the time of the funeral service at 7 pm, with Rev. David Leistra officiating.

Burial will be in Lakeview Cemetery in Calumet, Michigan.

Expressions of sympathy, memories and photos of LaVerne can be shared through her tribute page at huehnsfuneralhome.com.