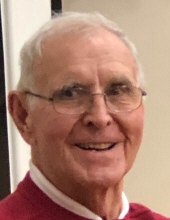 Leon “Butch” Jacques of DePere died on June 4, 2021. The son of a farming family led by Pearl (Mathu) and Elmer Jacques, he was born in Forestville on January 16, 1940.  Butch attended Algoma High School (class of ‘57) and enlisted in the US Marine Corps following graduation. He was stationed at 29 Palms, CA.  Butch graduated from Door-Kewaunee Teacher’s College, UW-Oshkosh, and held a Masters Degree from Northern Michigan University.  He taught middle school level education (seventh grade) in Fond du Lac, at Washington Junior High and at Edison Middle School in Green Bay.  He also served as the assistant principal of Washington Junior High for 12 years.  On June 15, 1963, he married the former Nancy Moeller.  Although they later divorced, they remained friends and participated in family events together over the years.

Butch was an active member of the Sister Bay Lions Club, the American Legion, and the Marine Corps League Door Peninsula.

Butch had the good fortune of officiating high school and college athletics for 30+ years.  He called WIAA football, basketball and baseball state tournaments.  He also officiated WISAA state basketball tournaments.  He worked these games with men who were friends as well as partners.  These include Al, Bernie, Bill, Chico, Chuck, Mike and Tom.  He also umpired several ISC World Softball Championships with Hub and Redbird.  Additionally, he had the good fortune of umpiring for USA Baseball throughout the US as well as in the Ukraine and Mexico. His baseball umpiring culminated by working the Door County League and the 1996 Summer Olympics in Atlanta.

Per Butch’s request, no formal funeral will be held.  A private memorial service and family gathering will be held at a later date.  In Butch’s memory, watch a high school sporting event without criticizing players, coaches and officials; take a walk or bike ride in a park or on a trail; have a bit of a refreshment with family and friends; and hug your kids and grandkids.  Special note: to all my former students and athletes and fellow teachers, thanks for making my teaching, coaching, officiating and administration career enjoyable.

Butch’s family would like to extend our most sincere thanks to all of the people who supported our dad during his illness/end of life, including Green Bay Oncology, the valet parkers at St. Vincent’s, and Unity Hospice.