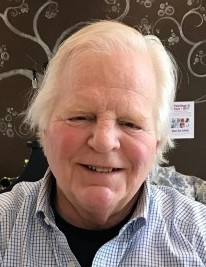 LeRoy “Lee” Blaine Rusche, 76, of Sturgeon Bay died at home in the arms of his loving wife, Crystal.

He was born in Sturgeon Bay, the youngest son of Harold Henry Rusche and Alice Maxine (Collins) Rusche. Lee attended Cherry School and graduated from Sturgeon Bay High School in 1962. He studied business and computer programming at UW-Oshkosh and earned his bachelor’s degree.

Lee served with the U.S. Coast Guard during Vietnam, entering into active duty in 1968 and during that year, was on the USCGC Chautauqua. He was stationed in Hawaii for three years and was a commander with his platoon. Lee was honorably discharged from service with the Coast Guard on St. Patrick’s Day in 1972.

He returned to Wisconsin and was a computer programmer at UW-Madison for four years. Lee moved home to Sturgeon Bay in 1976 and started a fruit and garden orchard on Cherry Road in the Town of Sevastopol. He continued that until just a few years ago. Lee’s parents started the farmers’ market in Sturgeon Bay in 1962 (on the land originally offered to the city of Sturgeon Bay by the Sampone family), and Lee helped run the market for more than 40 years. He also provided scuba-diving recovering services with his dad, helping to find lost personal items.

Lee married Crystal Kay (Hanlin) Bjarnarson on Christmas Eve in 1992 at the Wagon Trail Resort on Rowleys Bay. They enjoyed “dancing around each other” while operating their farmers’ market stand. Their customers were friends who became part of the family and could always expect a laugh from the funny sayings on Lee’s shirts and singing from Crystal throughout the day.

Lee also ran Door County Cooler — just south of Sturgeon Bay, in the Town of Nasewaupee near Schumacher Cemetery — which processed and made juice during the 1980s and 1990s. Lee was the voice of it radio ads and the face on its billboard. He helped run Cherryland’s Best market stand in Carlsville in the late 1990s. Lee also drove for Door 2 Door Rides until two years ago and made a lot of friendships through that.

He had a strong faith and love for the Lord. Lee grew up attending First Baptist Church in Sturgeon Bay and continued after he married Crystal. They were current members of Friends Community in Sturgeon Bay.

He loved his family and spending time with them, especially his children and grandchildren. Lee liked fishing, boating and hunting. Lee also enjoyed riding his motorcycle. He loved spending time in his orchards and gardens. Lee had a great mind and was a hard worker.

Arrangements are pending for Lee’s life to be honored later.

Memorials may be given in Lee’s name to Neighbor-to-Neighbor Volunteer Caregivers of Door County, DOOR CANcer or Homes for Heroes.

“Our family would like to express our heartfelt thanks to the doctors and nurses at Door County Medical Center, Door CANcer and the Milo C. Huempfner VA Clinic in Green Bay for all of your care and support through Lee’s illnesses. Thank you to Neighbor-to-Neighbor Volunteer Caregivers of Door County for the wonderful help you provided to our family. And thank you to the staff of Unity Hospice, especially nurse Gwen Wilke, for the compassionate care you gave to Lee and our family.”

Huehns Funeral Home and Door County Crematory in Sturgeon Bay are assisting the Rusche family. Expressions of sympathy, memories and photos of Lee can be shared through his tribute page at huehnsfuneralhome.com.