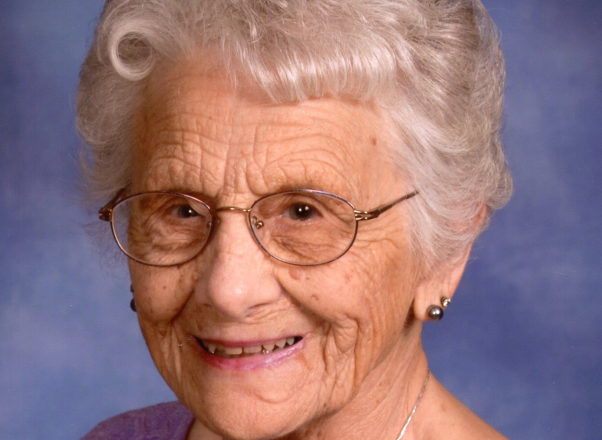 Lillian (Paul) Hucek, 95, of DePere, formerly of Forestville, died December 20, 2016.  She was born on May 27, 1921, in Luxemburg to William and Margaret (Kreilkamp) Paul.  Lillian was a 1939 graduate from Luxemburg High School.  She was employed at the Algoma Net Company and the Algoma Plywood office before her marriage to Frank Hucek in Casco on May 30, 1944.  Lillian then moved to Forestville where her husband owned a farm and they raised their children.

After the children were of school age, she became a Fuller Brush sales representative until her husband retired from Peterson Builders shipyard and they moved to the village of Forestville.  She and Frank belonged to Holy Name of Mary Church in Maplewood.  Lil was also active in volunteering in the Forestville Library.  She enjoyed many trips with her husband, visiting her children and always enjoyed family get-togethers.  Lillian and her husband moved to DePere in their later years and belonged to Resurrection Church.

After her husband passed away in 2003, she continued to enjoy Monday morning breakfasts with friends, baking, playing cards, reading and being with people.  She also enjoyed the winters she spent in Florida with her daughter and son-in-law.

She was preceded in death by her parents, her husband, one sister, Lucille (Elmer) Sisel; two brothers, Sylvan (Helen) Paul, and William (Gladys Krueger) Paul; and one brother-in-law, Elmer Lardinois.

Funeral services will be at 11 am, Dec. 29, 2016, at Resurrection Church on Libal Street in Green Bay.  Visitation will be at the church on Thursday from 9 am until the time of service.  Burial will be in the Old Church Cemetery in Maplewood.  Forbes Funeral Home of Sturgeon Bay is assisting the family.  Online condolences may be offered at forbesfuneralhome.com.

The family would like to thank Dr. Violetta Minca, Unity Hospice, the staff at Rennes Health Center – DePere, and Moraine Ridge for the care and compassion shown to Lillian.