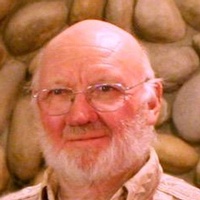 Lonald (Lonnie, Wimpy) Glenn Jorgenson, 82, of Washington Island, passed away with family by his side at Scandia Village Good Samaritan on April 27, 2018 . He was born on Washington Island,  November 13, 1935, the eldest son of Leonard and Sylvia Jorgenson.
Lonnie was a graduate of Washington Island High School and remained on his beloved island throughout his lifetime.  In 1956, Lonnie was drafted and served two years in the Army. He returned to Washington Island and met the love of his life, Diane Boniface. They married  on March 18, 1961 on Washington Island and were blessed with four children.
Lonnie and Diane raised their children on their farm. Lonnie was a hardworking man and typically worked multiple jobs while also farming. He worked for Al Shellswick logging and excavating as south point was being developed. He saw an opportunity to use those trees to produce lumber and purchased a saw mill to process the wood. Lonnie owned and operated Lon’s Excavating and Island Transfer. He and his good friend, Dale Bjarnarson, also owned and operated BJ Pump Co.
Lonnie enjoyed all things “island” especially the outdoors. He loved hunting and fishing, especially with his sons. He always had one of the largest vegetables gardens which he was very proud of and would often share his harvest with neighbors who would stop by. In his younger years he played baseball in the Door County Baseball league and when he hung up his cleats he could be found cheering for the Island team from the third base line.
Sadly, Diane passed on October 12, 1988 after an eight year battle with cancer.  After Diane’s death, Lonnie was fortunate to have found a special friend, Teri Oberg who he shared his remaining years with and was honored to help raise her three children Bobby, Aaron and Danny.
Lonnie is survived by his four children,Glenn (Kelly) of Jacksonport, Jim (Kelly) of Washington Island, Liz (Chris) Hecht of Sister Bay, Mike (Amy) of Washington Island. Grandchildren- Megan(Scott)Lindgren, Amber( Johnny), Hannah (Vinny) Ritchay, Diane (Logan) Haen, Matt, Helen, Hailey, Ryan and three great grandchildren. Sibling’s Kermit(Jill), Perry (Cathy), Russ, Joyce (Dave) Lackowksi, sister-in-law Marion Boniface and many aunts, uncles, nieces, nephews, cousins and special friends.
He was preceded in death by his wife Diane, special friend Teri, parents Leonard and Sylvia and brother-in-law Jim Boniface.
The family would like to thank the staff of Scandia Village for making his last months very comfortable; Door County Medical Center providers- Ed Wasie, NP, Dr. Lux and Dr. Johnson and all the staff at Green Bay Oncology for such wonderful care. The family would also like to thank all of the wonderful  friends and relatives who have stopped by to visit Lonnie and our family while he was on the island and while at Scandia Village. We are truly blessed!
Funeral service will be Saturday, May 5th at 11:00 at Bethel Church Washington Island followed by a time of remembrance and fellowship.
All memorials may be made to:
Door Cancer Inc
PO Box 423
Sturgeon Bay, WI 54235
Scandia Village- Good Samaritan
10560 Applewood rd
Sister Bay,WI 54234
Washington Island Community Health Program
1765 Townline Rd.
Washington Island, WI 54246