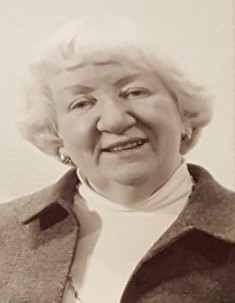 She was born in Milwaukee on March 15, 1927, the daughter of the late Frank and Pearl (Miller) Neuens. Lorraine graduated from West Division High School in 1945 before graduating from Milwaukee State Teachers College with a degree in Art Education. On November 6, 1948, she married Carl Hayes Mengert at St. Martini’s Lutheran Church in Milwaukee.

After teaching elementary art over 20 years in Edgerton and Janesville, organizing summer daytrips for the students with whom she taught, Lorraine and Carl became full-time Door County residents.

In 1981, she taught several Saturday children’s classes at the Peninsula Art School in Fish Creek, and then directed the school for the next five summers during its beginning and most vulnerable seasons. From there Lorraine became the director and curator of the Miller Art Center in Sturgeon Bay, she also served as vice-president of the Miller Art Center Foundation. While at the Miller Art Center, Lorraine began to collect information of the county’s artists and in 1996 published her findings as Door County’s Art History, a book revealing the beginnings of art, music and theatre in the area.

Lorraine was an avid knitter, and some of her works had been shown in exhibits. She was involved in the Picture Program at the Miller Art Museum, sharing art information with students at S.S. Peter and Paul grade school.

She was a member of Bay View Lutheran Church in Sturgeon Bay, PEO, and was voted one of the Top 25 most influential women in Door County.

She was preceded in death by her parents, Frank and Pearl Neuens; sister, Jean Hatler; and her brother, Richard Neuens.

A celebration of life will be held for Lorraine Mengert at 11 am on April 8 at Bay View Lutheran Church in Sturgeon Bay. Friends may call at the church on April 8, from 10 am until the time of service. A warm invitation is extended to all relatives and friends attending to stay for a reception and luncheon at the church immediately following the memorial service. Memorials may be given in Lorraine’s memory to the Miller Art Center in Sturgeon Bay. huehnsfuneralhome.com

The family would like to give a special thank you to Shannon Lauder and the staff at Cardinal Ridge for their loving care given to Lorraine.

Memorials may be given in Lorraine’s memory to the Miller Art Center in Sturgeon Bay.

Huehns Funeral Home & Cremation Services in Sturgeon Bay is assisting the Mengert family with arrangements. Condolences, memories, and pictures of Lorraine may be shared with her family at www.huehnsfuneralhome.com.