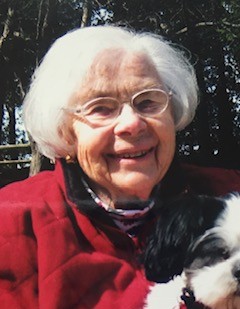 She was born in Sussex to George R. and Laura E. Podolske and grew up with her brother Raymond Podolske. Lorry, as she liked to be called, graduated from Waukesha High School. Her parents owned a hardware store in Sussex for more than 50 years. She then attended and graduated from Miss Brown’s Secretarial School in Milwaukee. She went on to work at Farmer’s & Merchant’s Bank in Menomonee Falls, where she met her husband, John E. Goode. They were married Sept. 8, 1945. They had three children: Barbara, Susan and John. The family lived in De Pere for many years.

Lorry eventually spent her summers in Door County, where she was an avid community volunteer. She had a very strong faith and worshiped at the Church of the Atonement in Fish Creek and St. Luke’s Episcopal Church in Sister Bay. She served in various capacities at the Church of the Atonement, including treasurer of a committee that raised funding for, and built, the Memorial Walls. She also served at the church to prepare the altar for Sunday mornings. In addition, Lorry served as treasurer of St. Luke’s Episcopal Church and held the first gathering and service at her home.

Additional volunteer activities that Lorry lovingly participated in include The Clearing, the Anderson Store, Peninsula Music Festival and PEO, and she enjoyed picking up residents at Scandia Village for church services at St. Luke’s.

Lorry had many hobbies and interests that included continuing education, taking classes at The Clearing and Björklunden, travel in the U.S. and abroad with friends, and travel with Elder Hostel. She was a talented knitter and loved doing crossword puzzles and needlepoint, playing bridge, gardening, golf, her dogs and cooking. Most importantly, she enjoyed time with her children, grandchildren and eventually great-grandsons.

Lorry will be dearly missed by all her family, friends and community. A private celebration of life will be held in July. In lieu of flowers, please consider a memorial donation to St. Luke’s Episcopal Church, Scandia Village or The Clearing.

Casperson Funeral Home in Sister Bay is assisting the Goode family. Expressions of sympathy, memories and photos of Lorry can be shared with her family through her tribute page at caspersonfuneralhome.com.