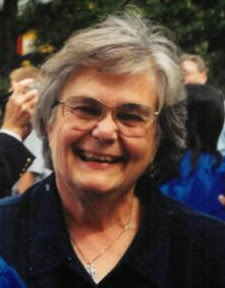 She was born February 05, 1937 in Urbana, IL the daughter of the late George and Opal (Davison) Mosier.  On August 11, 1956 she married David G. Lee in Sidney, IL.  They lived there until August 1974 when they moved to Sister Bay.   They were members of the First Baptist Church in Sister Bay. She worked as a secretary for many years at Sidney (IL) Grade School and Gibraltar Area Schools.

Upon retirement, Marajen volunteered at Scand Resale in Sister Bay.  She enjoyed quilting, knitting, coffee and chocolate with friends, and staying in contact with good friends from Sidney.  She was a dear mother and grandmother who was well known for making the best potato salad, lefse, and rice pudding you have ever tasted.

A memorial service will be held 1:00p.m. on Saturday, September 24, 2022 at First Baptist Church in Sister Bay with Rev. Mark Billington, officiating.   Burial will be at Mount Hope Cemetery in Sidney, IL.

Friends may call at the church Saturday, September 24 from noon until the time of services at 1:00 p.m.

Memorials may be given in her memory to Scandia Village Good Samaritan, Attn: Programs Fund.

A special thanks to Unity Hospice and the Care Center/Woodview staffs of Scandia Village.

Casperson Funeral Home in Sister Bay is assisting the Lee family. Expressions of sympathy, memories, and photos may be shared with Marajen’s family through her tribute page at www.caspersonfuneralhome.com.