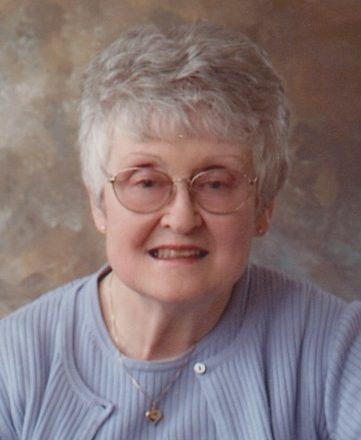 She was born Margaret Phillips Slaughter on September 29, 1931 in Blytheville, AR, the daughter of Alvah Maurice and Grace (Phillips) Slaughter. Margaret was united in marriage to Curran Clark Wilbanks on November 14, 1953 at St. Michael Catholic Church in West Memphis, AR. She and Curran moved to Branson, MO in 1958, and then to St. Louis. In 1963, they moved to Chicago, IL. They were members of St. Cletus Parish in LaGrange, IL. Curran went to work for Bay Shipbuilding Co. in Sturgeon Bay, WI in 1978, and they made their home on County Road C in the Town of Nasewaupee. Margaret served as Clerk for the Town of Nasewaupee for several years and was a member of the local homemaker’s club. Margaret was an active member of Corpus Christi Parish in Sturgeon Bay and the St. Ann’s Society.

She and Curran were blessed with nearly 46 years of marriage. He died September 22, 1999.

She was preceded in death by her parents; husband; granddaughter, Christina Marie Hlavaty; and sister, Patricia Baugh.

Visitation will be held from 12:00 p.m. until 2:00 p.m. at the funeral home. Procession to St. Joseph Cemetery will follow with her being laid to rest beside her husband, Curran.

Masks will be required and social distancing will be observed.  25% capacity limits will be used for attendees. Everyone attending will be able to express their condolences.

“Our family would like to thank the staff of Anna’s Healthcare, the Unity Hospice nurses and express our profound gratitude for their staff, and the other friends and caregivers – there are too many to mention by name, for all their care and devotion to Mom in her later years.”

Memorials may be given in Margaret’s name for the St. Ann’s Society.

Expressions of sympathy, memories, and photos of Margaret may be shared with her family through her tribute page at www.huehnsfuneralhome.com.