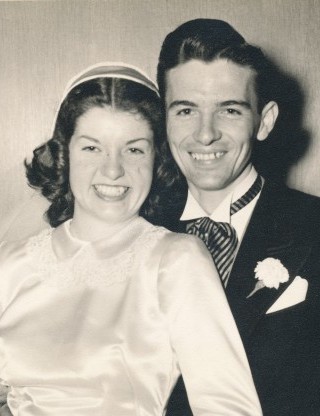 Marilyn C. Ahern, 90, of Egg Harbor died at her home with family at her side.

She was born in Brownsville, Texas, the daughter of the late and Josephine Colette (Burke) Yoakum and Frank J. Yoakum. After graduating from the Academy of Our Lady High School, she attended LeClerc College and later Mundelein College in Chicago.

On June 11, 1949, Marilyn was united in marriage with John “Jack” Ahern at St. Killian’s Catholic Church. In 1985, they moved to Door County. Together, they enjoyed traveling throughout their nearly 70-year marriage. They were active members of Stella Maris Parish in Egg Harbor, where Marilyn was an altar server. Marilyn took great joy in practicing her Catholic faith and lived her life as a loving Catholic woman. She always put others first, and she was a joy to be with. If you were with her, she made you feel of most importance to her.

A Mass of Christian Burial to honor Marilyn’s life will be held at 3 pm on Monday, March 18, at Stella Maris Parish in Egg Harbor, with Fr. David Ruby officiating. Marilyn will be laid to rest in St. John the Baptist Cemetery.

In lieu of flowers, your prayers are deeply appreciated.

Expressions of sympathy, memories and photos of Marilyn can be shared with her family through her tribute page at huehnsfuneralhome.com.