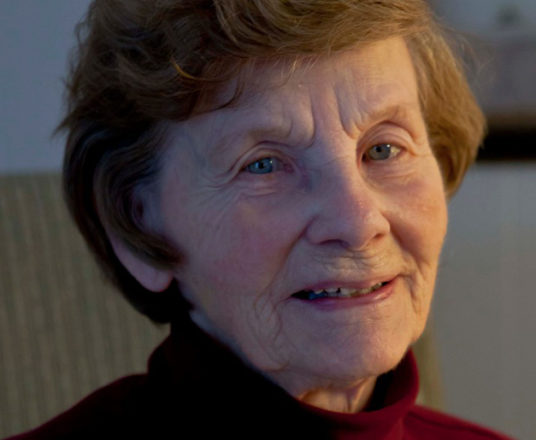 Marion I. Peterson, 92, of Sturgeon Bay died from complications due to Alzheimer’s. Marion was born to the late Jerome and Mary (Polich) Colombo.

Marion graduated from Sevastopol High School in 1945. On Sept. 3, 1949, she was united in marriage to Joseph Peterson at Sts. Peter and Paul in Institute.

Marion and Joe spent many years together, running the cherry and apple orchards at Sawyer Farms. She enjoyed when the children and grand-children came and helped in many different ways at the orchard. She loved cherry season, especially when the grandchildren were old enough to work at the orchard and help out with the harvest.

Marion loved the Colombo family tradition at Christmas when all of the families would rotate from house to house for dinner between Christmas and New Year’s Day. The cousins would play; the women would see what Christmas gifts were received; and the men would play cards. Marion hosted the Colombo family reunion for many years, giving her great joy at seeing and spending time with family.

Marion was a member of Corpus Christi Church and was an active member in both the Catholic Daughters of the Americas and the St. Anne’s Society.

Marion was preceded in death by her husband, Joe; her parents, Mary and Jerome Colombo; her sisters Lillian Bosman, Danica Reimer and Geraldine DeNamur; her brothers Bill Colombo and Jerry Colombo, Jr.; her daughter-in-law Carrie (Claflin) Peterson; and her brothers-in-law and sisters-in-law.

Funeral services will be held at 11 am, Monday, July 1, at Corpus Christi Catholic Church, with Fr. Ron Colombo officiating. Burial will be in St. Joseph’s Cemetery. Visitation will be 4-7 pm on Sunday, June 30, at the Forbes Funeral Home in Sturgeon Bay and 10-11 at the church on Monday.

In lieu of flowers, donations may be made to Corpus Christi Church or the Alzheimer’s Association.

The family wishes to express its deepest appreciation to Doreen Kiken for her many years of home care, to Pine Crest in Sturgeon Bay, and the staff at Bishop’s Court in Green Bay — especially Tom, who was a constant and compassionate caretaker.