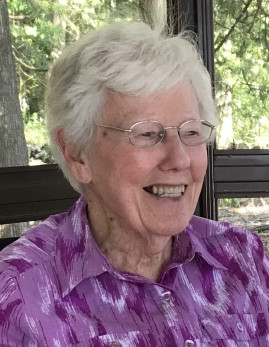 Marjorie Jane Fink, “Marge” to all who knew and loved her, 89, of Sturgeon Bay, died early Wednesday morning, May 11, 2022 at the Jack and Engrid Meng Unity Hospice Residence in the Town of Ledgeview.

She was born June 30, 1932 in Camden, NJ, the daughter of Dr. Arthur Gomersall Pratt and Vivian Isabelle (Beattie) Pratt. Marge attended Haddonfield Memorial High School in Haddonfield, NJ and played on the varsity tennis and field hockey teams. Upon graduating in 1950, she went on to study history at New Jersey College for Women (now Douglass College, part of Rutgers University) in New Brunswick, NJ. Marge graduated with the class of 1954. She was united in marriage to Robert Elwin Fink that fall on September 25, 1954 at her home church, Haddonfield Baptist Church. They first met at a local tennis club.

Marge and Bob started their family and resided in Haddonfield, NJ. They moved to Palatine, IL in the early 1960s. Marge worked as a teacher aide for Marion Jordan Elementary School in Palatine, IL for a brief period of time. Her primary care was devoted to raising her family at home. Marge and Bob played tennis together and were the Northwest Suburban Chicago Mixed Doubles Champs for six years in a row. Marge was also a finalist in the Middle States Tennis Championship.

In 1991, they retired to Door County, WI and resided in Sturgeon Bay. Together, they attended the Sturgeon Bay United Methodist Church. Marge was an active member at church and served on several committees. She was a longtime member of the women’s international sisterhood and philanthropic organization, P.E.O., Chapters in Palatine, IL and Sturgeon Bay, WI. She founded Chapter EI in Sturgeon Bay. Marge volunteered with Meals on Wheels in Sturgeon Bay, helping with deliveries for over 25 years. She remained an avid tennis player throughout her life and enjoyed playing at the Haddonfield Club in New Jersey, the Barrington Tennis Club in Illinois, and also at Otumba Park in Sturgeon Bay, among other places. Marge enjoyed traveling in the U.S. and to over 20 countries. She also loved spending time at her cottage on Green Bay.  Above all, she loved her family.

Marge will be missed by her dear husband, Bob, with whom she was blessed with over 67 years of marriage; four children, Diane Fink (Richard Greene) of Oakton, VA, Linda (Herman) Gloria of Santa Fe, NM, Gary (Ann) Fink of Hillsboro, MO, and Tracy (Ernest) Deak of Chicago, IL; four grandchildren, Leo and Jesse Greene and David and Robert Gloria; one brother, Robert (Alix) Pratt of Portland, ME; sibling-in-law, Sally Pratt of Belen, NM; other relatives; and friends.

Marge’s life will be honored with a memorial service held at 11:00 a.m. on Monday, May 16, 2022 at the Sturgeon Bay United Methodist Church with Rev. David Leistra officiating.

The service will be livestreamed on the “Huehns Funeral Home, Inc. & Door County Crematory LLC” Facebook page (www.facebook.com/HuehnsFuneralHome). Those anticipating watching the service on Facebook are encouraged to “Like” or “Following” the funeral home Facebook page any time prior to the service to receive notification of the live broadcast.

Visitation for family and friends will be held at the church on Monday from 10:00 a.m. until the time of service.

“Our family would like to express our heartfelt thanks to the staff of Unity Hospice for the wonderful, compassionate care given to Marge/our mother.”

Huehns Funeral Home, Inc. & Door County Crematory LLC in Sturgeon Bay are assisting the Fink family. Expressions of sympathy, memories, and photos of Marjorie may be shared with her family through her tribute page at www.huehnsfuneralhome.com.