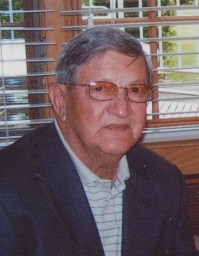 He was born April 17, 1925 at the family home in Baileys Harbor, son of the late Martin Leon and Esther Marie (Resler) Schram. After graduating from Gibraltar High School with the Class of 1943, he enlisted in the United States Army. Gene served in World War II before his honorable discharge in 1946. He remained active with the American Veterans Post 51, Veterans of Foreign Wars Post 3088, American Legion, and Disabled American Veterans throughout his life. In January of 1961, he marched with the AmVets Post 51 Drill Team at President John F. Kennedy’s inauguration. On September 13, 1947, Gene and Betty Mae Krueger were united in marriage at Atonement Lutheran Church in Racine. They two were wed for 69 years before Betty preceded him in death on October 8, 2016. They were members of St. Peter’s Lutheran Church, where Gene served on the church council and was a member of the Men’s Club. Gene worked for the Door County Advocate for 37 years, starting as a linotype machinist and retiring as a salesman for the advertising department. While working for the newspaper, he started a part-time job working for a monument company and eventually opened Schram Monuments in 1957, which he owned and operated until 2003. He enjoyed golfing, bowling, and playing cards. Gene was a kind, generous, and attentive gentleman who was the perfect example of a loyal husband and father.

He was preceded in death by his parents, Martin and Esther Schram; wife, Betty Mae; daughter, Mary Gigot; sons, Marty and Harold Schram; and brothers, Darrell, Earl, and Gordon Schram.

Gene’s life will be honored with a memorial service at Huehns Funeral Home on Friday, February 26, 2021 at 11:00 a.m. with Pastor Joel Sauer of St. Peter’s Lutheran Church officiating. Military honors will be performed immediately following. He will be laid to rest in Schumacher Cemetery in the spring.

Visitation for family and friends will be from 9:30 a.m. until the time of the service. In lieu of flowers, memorial donations can be made in Gene’s name to St. Peter’s Lutheran Church.

For those in attendance for the visitation and/or memorial service, temperature checks will be taken upon entering and masks and social distancing are required. A 25% dual-chapel occupancy will be observed (25 people per chapel including the family).

Expressions of sympathy, memories, and photos of Gene may be shared with his family through his tribute page at www.huehnsfuneralhome.com.