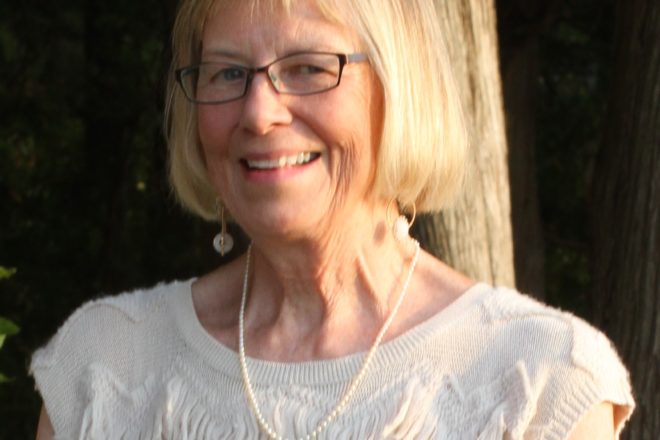 Mary Glenn Torinus, mother, wife, dancer, and massage therapist, died peacefully on January 8 in Egg Harbor, Wisconsin after a long illness. It was a graceful finish to a generous and elegant life of motherhood, community service, and creative movement.

Mary was born the second of three children to Donald and Becky Sharp in Green Bay, Wisconsin on October 24, 1938. As a child, she loved to dance, and she studied ballet. She attended Green Bay East High School, graduating in 1957. She graduated from Stephens College in Columbia, Missouri in 1961. She especially celebrated and cherished her college days and escapades with the lifelong friends she made there.

In October of 1962, Mary crossed the Atlantic on the Queen Mary with friends KeeKee Minor and Abett Icks. They backpacked for a year, exploring Europe, Western Asia, and Africa. They hitched a ride up the Nile on a barge to Sudan. When they arrived, they were told not to swim in the Nile, so it was the first thing they did. To extend her travels, Mary got a job in Berlin stapling boxes, and she worked in a pickle factory in Amsterdam. She often spoke about the endless adventures she experienced while sightseeing in so many places.

When she returned to the states in 1963, she worked as a secretary, first in Denver, Colorado and then in Minneapolis, Minnesota. She also worked in Milwaukee, Wisconsin as a window dresser for the Gimbels department store. While at Gimbels, she discovered a talent for inventive gift wrapping, decorating, and interior design.

Mary married Tom Torinus on May 29, 1965. She was Tom’s steadfast, patient, and loving companion and best friend. In 1982, they each set out on spiritual paths that progressively deepened their intimacy and marriage for 55 years. Their journey together brought them to Milwaukee, Green Bay, Menominee, Michigan, Chicago, Illinois and finally Door County, Wisconsin.

Motherhood was the most fulfilling role of Mary’s life. She was the quintessential natural mother and grandmother, and she continuously spoke about the joy it brought her. Her two daughters, Alexandra Torinus and Elizabeth Torinus, and her grandchildren remain in awe of the infinite love and divinity she gave them.

Mary found another life calling in Chicago while Tom was earning degrees in theology and pastoral counseling there in the 1990’s. She took a class in massage therapy, and she instantly recognized this as the higher purpose she had sought for so long. She studied for four years at the Lakeside School of Massage in Chicago, earning her massage therapy license.

Later, after moving to Door County, Mary began to practice as a massage therapist at the St. Joseph Retreat Center and at local spas and hotels until 2017. Many of her clients complimented the intuition, sensitivity, compassion and spirituality she brought into her practice.

While in Door County, Mary also discovered InterPlay, a practice of honoring the wisdom of the body through creative movement, vocal expression, and storytelling. Training under one of its founders, Cynthia Winton-Henry, Mary became an InterPlay leader and teacher.

Mary was a generous volunteer in every city she lived in. She was a member of Milwaukee’s Junior League and a Girl Scout troop leader in Menominee. She also volunteered as a massage therapist in Door County for the free clinic, and for the elderly at Hearthside and the Good Samaritan-Scandia Village.

Mary was an exceptionally graceful swimmer. Throughout her life, she could be found every morning swimming laps at the local YMCA, first in Menominee and later in Door County. Those who knew her well most certainly retain an image of her in a bathing suit and swimmer’s cap, flippers in hand. She taught swimming at the YMCA in Menominee, and she was often the first person in the waters of Green Bay as the summer season approached, beating out younger swimmers even as recently as last year.

Most at home in the outdoors, Mary loved to walk and hike in the woods, especially appreciating the trails in Peninsula State Park. She noticed every petal, heard every bird’s song and held deep gratitude for them all. She was a greathearted caretaker of everything in life, comprehending the beauty in the animals, creatures and plants around her.

Mary had a wonderful laugh and would often giggle herself to tears. Her grandchildren loved nothing more than to invent ways to amuse her, hoping to catch a glimpse of her overflowing with glee.

A profoundly gifted listener, Mary was best known for her gentle, understanding, and angelic presence. Many people spoke about how uplifted, healed, and comforted they were in her company. Whether she knew you for a moment or a lifetime, she saw you and celebrated you.

Lines from a poem written by her husband, Tom, possibly describe Mary best:

Moving easily with given rhythms

I see you standing at

the doorway to divinity itself

unwilling to venture far away

to the magic of angels

who are your closest friends.

This is why I stay close to you.

She was preceded in death by her parents; her brother, Don Sharp; and her sister, Stephanie Newell.

A memorial service and gathering will be held as soon as COVID-19 allows, hopefully this summer in Door County.

Huehns Funeral Home, Inc. & Door County Crematory LLC of Sturgeon Bay are assisting the Torinus family. Expressions of sympathy, memories, and photos of Mary may be shared with her family through her tribute page at www.huehnsfuneralhome.com.