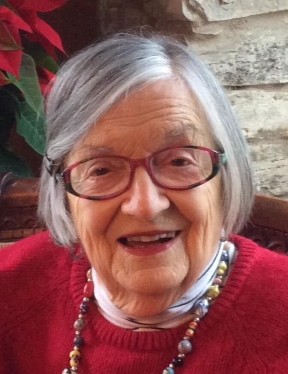 Mary Marjorie “Polly” Durgin Warner  b. 5-11-23 in Racine, Wisconsin to Elmer and Pearl Trumbull Durgin. She passed away at the age of 95 in Sister Bay, Wisconsin. She married Dean Gilbert Warner in Racine on September 7, 1946.  Polly graduated from Lawrence University Conservatory of Music, specializing in voice and violin, with a degree in Music Education. She became director of the first bell choir in Wisconsin at First Presbyterian Church of Racine, as well as choir director at Atonement Lutheran Church.

Polly was very active in civic organizations such as Junior League and the Racine Symphony Orchestra, and a volunteer with Boy and Girl Scouts, Red Cross, PTA, and AAUW in Milwaukee.

In 1967, Polly began teaching at the Racine Montessori School and taught there for twelve years until 1979.

After retirement, she and Dean spent many happy years at the family retreat in Ellison Bay, Wisconsin, where she and Dean ran two businesses. She continued her life-long interest in learning at The Clearing Folk School of Ellison Bay where she became an accomplished oil painter.

The family will meet to celebrate her life at a private memorial at Polly’s beloved Windermere home.

Many of her family and special friends were able to celebrate Polly’s 95th birthday with her just a few weeks before her passing.

Donations may be made to The Clearing Folk School of Ellison Bay. Polly’s family would like to give special thanks to Martha Coventry and the staff at Hearthside and Unity Hospice for the love and care they gave to Polly, as well as Kathleen Fernandez, who cared for Polly in her home.

Huehns Funeral Home, Inc. & Door County Crematory LLC in Sturgeon Bay are assisting the family. Expressions of sympathy, memories, and photos of Mary may be shared with her family through her tribute page at www.huehnsfuneralhome.com.