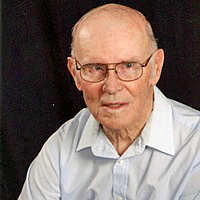 Mike was born on May 8, 1929 in Medford, Wisconsin the son of the late Harry and Edna (Graham) Colwell. On August 22, 1955 he was united in marriage to Beatrice Duquaine in Fish Creek, WI.

Mike was a member of St. Francis Cabrini Catholic Church in West Bend and has been a member of the Knights of Columbus for 17 years. He proudly served his country in the U.S. Army during the Korean Conflict. After service, Mike was a Teamster and worked as a truck driver for 37 years. In his retirement he enjoyed RV travel and square dancing.

Those Mike leaves behind to cherish his memory include his wife, Beatrice; two children, Jeffrey Colwell of Tulsa, Oklahoma and Joseph (Ann) Colwell of Hubertus; four grandchildren; one great grandchild; a sister, Kathleen (Richard) Kelly of Kansas City, Missouri; other relatives and friends.

In addition to his parents, Mike was preceded in death by a brother, Patrick Colwell.

A Memorial Mass will be held at 11:00 a.m. on Friday, October 6, 2017 at St Francis Cabrini Catholic Church, 1025 S. 7th Avenue, in West Bend with Rev. Bales officiating. Burial of his cremains will take place at Blossomburg Cemetery in Peninsula State Park on Saturday, October 7, 2017 at 1:00p.m.

Mike’s family will greet relatives and friends at the church on Friday, October 6, 2017 from 10:00 a.m. until time of the Mass.
The Myrhum Patten Miller and Kietzer Funeral Homes have been entrusted with Mike’s arrangements, Additional information and guest book may be found at www.myrhum-patten.com