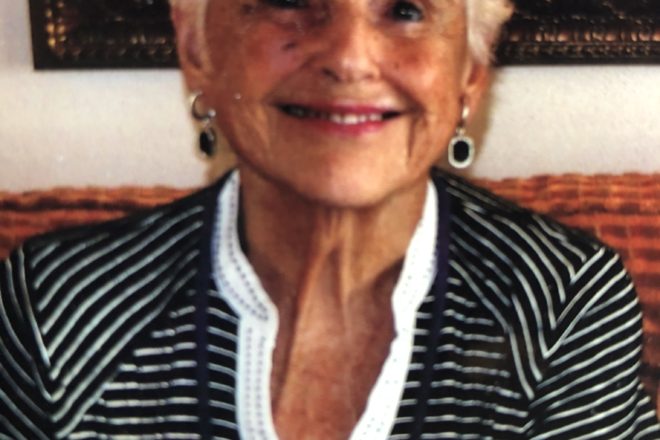 Muriel Seegers died on August 20, 2020, in her sleep, after living with Alzheimer’s disease for several years. She was born on September 8, 1927 in Chicago. After graduating from Oak Park High School, Muriel attended University of Wisconsin at Madison and Kathryn Gibbs Secretarial School. She met Glen Seegers on a blind date her senior year of high school and they were married November 22, 1947 in Oak Park, IL. They would have celebrated their 73rd wedding anniversary this year.
After a few years, they moved to Lombard, IL and raised their 4 children. Summers were spent in Sister Bay at Harmony Trend Cottages owned by her mother and father, Harold and Jane Piety. After many enjoyable years visiting, Muriel and Glen bought homes in Fish Creek and then Baileys Harbor. After Glen retired, they resided in Marco island and Baileys Harbor.
Muriel’s favorite past times included bridge, golf and baking. She ran a duplicate bridge group out of her home in Bailey’s Harbor for many years and continued it at Maxwelton Braes. She played in duplicate bridge tournaments all across the country and at the Naples Bridge Center and Bridge Deck of Naples, achieving the Diamond level Life Master through the ACBL.
Muriel enjoyed golf and played in leagues at Peninsula State park, Maxwelton Braes and Marco Island Country Club. She is one of the founding members of the Bonnie Brae Golf League. Her fellow golfers envied her long straight fairways shots.
Always baking, Muriel brought her baked goods to every event, and everyone looked forward to her chocolate creations and lemon squares.
Muriel had a favorite color and that color was purple. She even had a purple car at one time and her children were not thrilled to be seen in it or drive it.
Muriel is survived by her husband, Glen Seegers, her children, Cheryl (Jerry) Cizek, Karen (Bill) Reifsnyder, Marcia (Michael) Hosni, Dale (Cynde) Seegers, her 9 grandchildren and 13, soon to be 14, great grandchildren. She is preceded in death by her parents, Harold and Jane Piety, her brother James and sister Carol.
The family would like to thank all the caregivers who helped Muriel and the family through her last few months, including the caregivers at New Perspective in Howard, where Muriel resided before relocating to Cardinal Ridge, Unity Hospice and the caregivers at Cardinal Ridge.
A private memorial gathering will be held for the immediate family to celebrate Muriel’s life on what would have been her 93rd birthday, September 8, 2020.