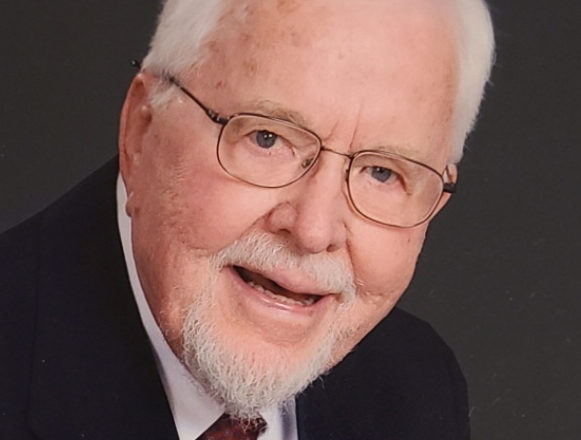 Neil Joseph McCarty was born in Kaukauna on Feb. 13, 1921. He died on November 12, 2020. His birth and death, and much of his life, took place in Kaukauna, Wisconsin.  Neil was an outstanding student at Kaukauna High School (class of ‘38), and a graduate of Notre Dame University, South Bend, Indiana. He served as a lieutenant in the Army Air Corps during World War II. In 1946 he returned to civilian life and was accepted into Harvard Law School. While there, he met a young lady from Lake Charles, Louisiana, Pat Kaough. They fell in love and were married on February 3, 1948 and shared nearly 74 years of married life.

In 1949 he received his law degree, and returned to Kaukauna. As no established firm offered to hire him, he hung his own shingle. After a few lean years, his law practice began to experience steady growth. By the time he retired in the late 1980’s the firm was the largest law firm in Kaukauna. Some years later the firm moved to Appleton.

Although no longer associated with it, he was asked if his last name could be used to brand the firm with a name that had come to stand for integrity, honesty, and quality.

Neil McCarty was a life-long Catholic Christian who was a member of Holy Cross Catholic Church in Kaukauna. After the death of his mother in 1975, he drew closer to his brother Tom, a Trappist monk of New Melleray Abbey in Iowa. A reunion of the McCarty and Schultz families was held at the Monastery yearly until shortly after the death of Fr. Tom in 2007.

During his retirement years, Neil and Pat lived near Jacksonport, Wisconsin in Door County for about 25 years. Neil developed a hobby of writing poetry, which he pursued for ten or more years until he felt he had said all he had to say. He took an active interest in preserving the natural beauty of Door Co., and was affiliated with the Door County Land Trust, and Door County Property Owners Assn.,

Before and after retirement Neil and Pat found time to visit other countries. Their favorite was Ireland which they visited 7 times, and their enthusiasm for all things Irish was contagious to other friends and family.

Feeling a need to be nearer to family members, Neil and Pat moved back to the Fox Valley, where they spent six years at The Heritage Retirement Community in Appleton. In 2018 they required more care, and moved to St. Paul Elder Services in Kaukauna.

Neil was preceded in death by his parents, Joe and Grace McCarty, and by his siblings, Janet McCarty Fieweger, Fr. Tom McCarty, O.C.S.O., and JoAnn McCarty Schultz. His children who pre-deceased him are Mary Elizabeth (infant), Robert Charles (pre-school), and Daniel Carroll (adult). He is survived by his wife Patricia K. McCarty, and his children and their spouses, Joseph (Tony Mayard) of Lafayette, LA, Mary (Pat Quinn) of Inis Oirr, Ireland, Tom (Wendy Reddeman) of Madison, WI, John (Shima Orans) of Milwaukee, WI , Ellen (Ricardo Pimentel) of Shorewood, WI, Laurence of Kimberly, WI, Teresa (Juvenal Llerenas) of El Sobrante, CA, Margaret of Madison, WI, and Paul (Janice George) of Appleton, WI. Neil and Pat have a current total of 20 grand-children and 10 greatgrandchildren.

Due to restrictions related the COVID-19 Coronavirus pandemic, his funeral and burial will be held privately. No flowers, but memorial donations are encouraged, to St. Paul Home Care Assurance Endowment Fund c/o 316 E. 14th St. Kaukauna, WI 54130, or to the Door County Land Trust at P.O. Box 65, Sturgeon Bay, WI 54235.

For more information or to share a memory of Neil, please visit www.wichmannfuneralhomes.com.

The Wichmann Funeral Home of Appleton is serving the McCarty family.