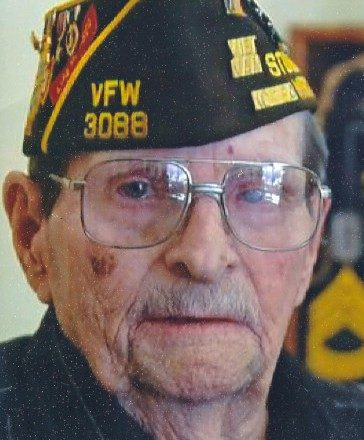 He was born May 20, 1931 in Sturgeon Bay, the son of the late Frederick “Fritz” and Pearl (Ehlers) Kugler. Before graduating high school at Sevastopol, Orville enlisted with the United States Army. His career serving our country spanned 20 years, until his retirement on July 31, 1969 as Sergeant First Class.

On September 6, 1952, Orville married the love of his life, Virginia A. DeLair at Fort Riley, Kansas. He always said, “She was the best thing that ever happened to me.” They were blessed with 55 years of marriage. Virginia died September 7, 2007. Upon returning to Sturgeon Bay after his service, Orville worked as a custodian for the Door County courthouse, Petry’s Motel in Baileys Harbor, cooked at the Ivanhoe, bartended at the Jacksonport Saloon, and started Dave’s Tree Service in the mid-1970s.

He enjoyed spending time at the cabin in Townsend, deer hunting, gardening, and tinkering in the garage. As Orville would say, “My junk is better than your junk.” He liked shooting darts and playing pool. Orville will be remembered for his quick wit, positive attitude, and dedication to our nation’s service members.

He was a member of the VFW Post #3088 in Sturgeon Bay and held the offices of honor squad leader, secretary, and treasurer.

He was preceded in death by his parents; wife; brother and sister, Gerald Kugler and Laura Belle; and a great-grandson.

A memorial service was held at 7 pm, March 10, 2018 at Huehns Funeral Home in Sturgeon Bay with Rev. Reeder Herrick officiating. Military honors by the United States Army and VFW Post #3088 will follow at the funeral home.

In lieu of flowers, memorials may be given in Orville’s name for the Door County Veteran’s Services Office.

“Our family would like to extend a special thanks to the staffs of Unity Hospice and Sturgeon Bay Health Services and also to Jennifer for the special care given to our dad in his final days.”

Expressions of sympathy, memories, and photos of Orville may be shared with his family through his tribute page at www.huehnsfuneralhome.com.