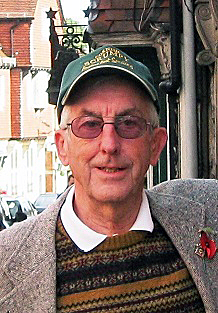 Returning to England in 1961, Peter trained for and became a telecommunications engineer. He resumed his world travels as a British ex-patriot with employment in the Middle East and Europe. In 1981, the British Institute of Management admitted Peter as a member of the Institute. Shortly after that, the US company, Motorola, enticed him to the USA, only to send him to work in Saudi Arabia! He maintained the friendships with other ex-pats after they dispersed to Wales and South Carolina.

He eventually moved to the United States and became a US citizen, retaining his British citizenship. Peter met his wife, Victoria in 1997 in Chicago and they married in 2001. Among their close friends in Chicago are Virginia Barry, Eduardo and Susan Cotillas, Ellen Benodin and Sue Roberts. He retired to Door County, Wisconsin in 2001 where Peter exercised his passions for photography and the sea (Lake Michigan). Peter and Victoria opened Wyatt’s Gallery in 2004 in Sturgeon Bay and soon moved the gallery to their home in Sevastopol. Also in 2004, Peter and Victoria began refit of a 1982 Catalina 38, S/V Kipper which they launched in 2005 and enjoyed many beautiful sailing trips. They joined the Door County League of Women Voters, Safe Lawns of Door County, Door County Buy Local, Door Property Owners, Door County Environmental Council, Crossroads at Big Creek and Clean Water Action Council and together were active in promoting and defending political, social and environmental justice.

In 2015, Peter and Victoria said farewell to their many friends in Door County, including Don and Julie Sarter, Harry and Judy Porter, John and Sara Wagner, the Groeschl/Days, Egelands, Faustinis, Fitzgeralds, Grauls, Goettlemans (many), Hitzmans, Kohouts, Kudicks, Leas, Pohs, Senarighis, Sigmanns, Skares, Utesches, and so many more kind and generous people who brightened everyone’s lives by their thoughtfulness. Peter and Victoria moved to Lemont, Illinois, where they immediately met the neighbors and made new friends in the MacDonalds, Nizioleks and the Luces.

Since meeting Victoria in 1997, Peter was included in all the celebrations of her family in the Chicago area. The La Porte, Klementzos and Socco families were warm and welcoming. The move to Lemont would not have been so successful without the countless hours spent by Joe, Cindi and Bridget La Porte during the construction and inspection of the new home. And, without their help, Victoria would not have been able to manage the care for Peter in his new home.
Peter was cared for with compassion and consideration by many doctors, specialists, nurses, staff and therapists. Initially at Aurora Hospital in Green Bay and Aurora St. Luke’s in Milwaukee, inpatient care at Bellin Health in Green Bay, followed by outpatient therapy at the Rehabilitation Institute of Chicago in Willowbrook (now the Shirley Ryan Ability Lab). For most of the last three years, Peter was nurtured and comforted by the incredible professionals at Loyola Medical Center primary care, speech therapy, hospital, clinics, home health and hospice.

During Christmas week, Peter was comforted by his friends including Nick Klementzos and Don and Julie Sarter. Victoria’s mother: Fritzi Cerinich; sisters: Cinthia and husband Joseph La Porte, Melanie Cerinich and husband Joseph Socco and his daughter Gabriella; nieces: Bridget La Porte and Eleni Klementzos; and nephew: Kosta Klementzos spent their Christmas Eve this year with Peter in his home in Lemont.

Peter is survived by his loving friend of 20 years and devoted wife of 17 years, Victoria L. Cerinich. In Bournemouth, England, survivors include his daughters Tracey (Ian) Rockett and Stephanie (Graham) Meredith, his four grandsons Phillip and Liam Rockett and Brandon and Ryan Meredith. Also in England, are his half-brother Richard (Valerie) Wyatt, their children including his close niece Selena and their grandchildren. Living in Canada are his half-sisters Anne Leslie-Howard and Vivien Rose and his close great-nephew Tyrone (Ranjit) O’Neill and the four boys, Owen, Liam, Ciaron, Gavin and their two daughters Keira and Maeve. Peter is survived by many aunts and uncles, cousins, nephews and nieces of both the Wyatt and Davey families living around the globe.

Per Peter’s request, private services were held at Care Memorial Cremation, Romeoville, Ill., on Dec. 29, 2017, with cremation to follow immediately.