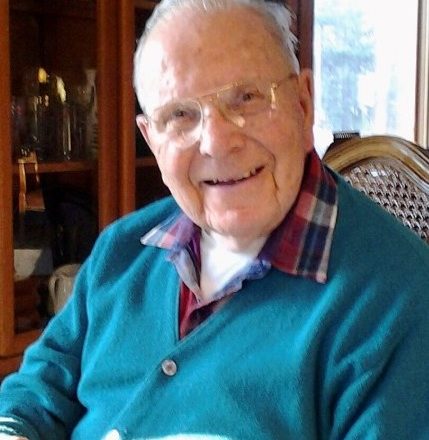 Philip W. Berns, 95, went to live with his Lord on Dec. 7, 2019 at Scandia Village in Sister Bay, surrounded by his family. He was the son of William and Leona Berns, born on April 16th, 1924, and a lifelong resident of Sister Bay. While attending Gibraltar High School, he met classmate, Clarice Erickson, who became the love of his life. Phil enjoyed sports and excelled in ski jumping at meets held in Peninsula State Park.

Right after high school, Phil left home for WWII and spent three years with the Army Air Force. While serving on a B-17 Bomber crew with the 8th Air Force based in England, Phil and his crew flew bombing missions over Germany. Their planes had numerous close calls, once catching fire and making an emergency landing in Belgium. Phil’s mechanical knowledge and quick thinking were instrumental in saving the plane and crew, and he was awarded a meritorious medal for missions flown. Later, he was a charter member of the American Legion Billy Weiss Post in Sister Bay.

On a furlough home in 1944, Philip married his high school sweetheart and they began a life together that would last happily for 68 years. They had three children, Jean Berns (Charles) Jones of Rewey, WI; Janet (Dennis) Olson of Omro, WI; and Jim (Jennifer) Berns of Sister Bay. Phil was an affectionate, generous man who delighted in his children, seven grandchildren and eleven great-grandchildren. Phil and Clarice shared a lifelong enjoyment of sports and music, and traveled throughout the U.S. and internationally.

Philip employed his strong work ethic at various positions in Sister Bay. In later years, he retired from being Rural Mail Carrier for the U.S. Post Office, and then drove school bus until his mid-70s. During his years on the bus, he was loved by countless children, many of whom, though now grown, still refer to him as “Grandpa.”

Throughout his lifetime, Philip remained devoted to his Catholic faith. He was a member of the Knights of Columbus and an active member of Saint Rosalia Parish in Sister Bay, where he helped with Mass preparations. He served Mass in Sister Bay from the age of six years until he was 92. He holds the record for being the longest serving “altar boy” in Stella Maris Church memory.

A Mass of Christian Burial will be held on Friday, December 13th, 2019, at 4:00 p.m., at Stella Maris Parish–Sister Bay site, with Fr. Thomas Farrell officiating. A reception and visitation will follow in the church hall. Burial will take place at a later date.

In lieu of flowers, donations will be given in Philip’s name to one of his favorite charities, St. Jude Children’s Hospital.

“Deepest gratitude is extended to the staff members (Angels) at Scandia Village for their extraordinary care and kindness to Philip, as well as, to his entire family. It is so appreciated.”

Casperson Funeral Home in Sister Bay is assisting the family. Expressions of sympathy, memories, and photos of Philip may be shared with his family through his tribute page at caspersonfuneralhome.com.