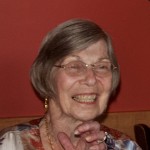 Priscilla was born in Chicago, daughter of the late Dr. Walter and Catherine (Harvey) Hoeppner. She attended Denison University in Ohio, where she met her husband, Clayton William Murphy, also from Chicago. She was the mother of three sons, Clayton Jr., Robert and William; and a grandmother of six.

Priscilla was a medical researcher at the Rheumatic Fever Institute in Chicago and later worked as a library assistant in several schools in West Des Moines and St. Charles. Music was a special part of her life. Church, P.E.O., choir and community volunteering were important activities.

A graveside service will be held on Tuesday, June 18, 10 am, at the Little Sister Cemetery in Sister Bay.

Casperson Funeral Home in Sister Bay is assisting the Murphy family. Expressions of sympathy, memories and photos of Priscilla can be shared through her tribute page at caspersonfuneralhome.com.