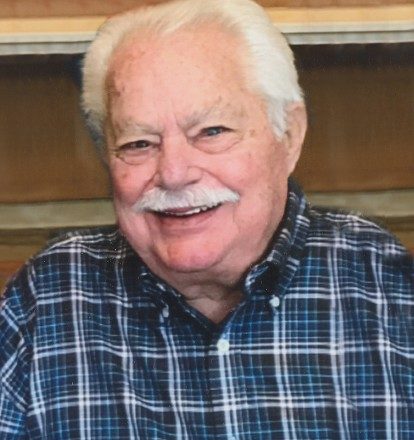 Richard Allen Campbell, 85, of Sturgeon Bay, died at home from natural causes with his wife, Jan, by his side on Tuesday, June 1, 2021.

He was born September 1, 1935, in Anderson, Indiana, son of the late Jess and Laura Campbell of Whitewater, Wisconsin. He was a graduate of Williams Bay High School and University of Wisconsin – Whitewater, where he obtained his bachelor’s degree in English and Economics in 1960. Dick married Jeanette “Jan” Wendt on April 6, 1958, at St. John’s Lutheran Church in Green Valley. He earned an honorable discharge from the United States Navy in 1956, his tour of duty was on Midway Island.

Dick’s professional career began as an assistant store manager for Montgomery Ward in Woodstock, IL, then in advertising and sales for Evinrude Motors in Milwaukee, Kansas City, and Atlanta. He was co-owner of Bald Ridge Marina in Cumming, GA and an instructor and registrar for Atlanta Area Technical College. Upon moving back to Wisconsin, he was employed at Gateway Technical College in Racine and Elkhorn and then as campus administrator for Northeast Wisconsin Technical College in Sturgeon Bay before opening his own business, Campbell Incentive Company. During his working career, he achieved many awards: Vocational Teacher of the Year by the American Vocational Association, Gateway Technical College Challenge Award for Creative and Innovative Instruction and received a Citation by Assembly of the State of Wisconsin for his 1983 National Teacher Award.

Dick was the past-President of Wisconsin Vocational Association, a member of Crime Stoppers of Green Bay, and taught Learning in Retirement classes at NWTC. He served on three different Chamber of Commerce and was a marketing consultant to the Elkhorn Development Corporation. In 1982, he developed long-distance learning for marketing classes for radio broadcasting and taught over WGTD – FM 91. Dick and Jan were members of Bay View Lutheran Church in Sturgeon Bay.

Dick had a passion for helping others, which led to his 20-year volunteer commitment to the Hmong community in Green Bay and the Fox Valley. He was on the Board of Directors at the Hmong Center, Advisor to Wisconsin United Coalition of Mutual Assistance Association, Inc., was co-founder of Hmong Freedom Council, and worked with United Nations and the governments in Laos and Thailand.

A colleague of Dick’s summed up his professional credentials by saying, “He was an excellent instructor, a vocational leader, a hard worker, a team person, an innovator, a sensitive person, and a happy, secure person.”

Dick will be missed by his loving wife of 63 years, Jan; brothers, Joe (Karin) Campbell of Whitewater and Bill (Helen) Campbell of Prairie du Sac; sister-in-law, Grace (David) Dahlke of Campbellsport; and nieces and nephews.

Dick’s life will be honored with a memorial service at Huehns Funeral Home in Sturgeon Bay on Saturday, June 5, 2021 at 11:00 am with Pastor Gary Scharrig officiating. He will be laid to rest in St. John’s Lutheran Cemetery in Green Valley.

Visitation for family and friends will be at the funeral home from 9:00 until the time of service. In lieu of flowers, memorial donations can be made in Dick’s name to Big Brothers Big Sisters of Northeast Wisconsin, the Door County Community Foundation, or the NWTC Educational Foundation.

Expressions of sympathy, memories, and photos of Dick may be shared with his family through his tribute page at www.huehnsfuneralhome.com.