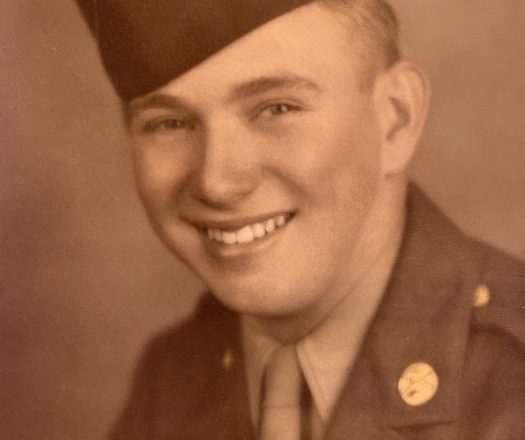 Richard “Dick” Charles Adams, 94, of Sister Bay, WI, died peacefully and painlessly January 3, 2022, with family at his side.

He was born July 29, 1927, in Chicago, IL, to Walter August Adams and Lillie Victoria (Youngberg) Adams. Dick was graduated in 1945 from Oak Park River Forest High School in Oak Park, IL, and almost immediately enlisted with the United States Army on June 23, 1945. He was ultimately stationed in Corozal, Panama, in the Canal Zone. He served in the Quartermaster’s office, though his true joy was playing with and captaining the baseball team on the Army base. Dick loved to regale with stories of the American major and minor league teams that would come to Panama for spring training exhibition games. He was honored to play with such greats as Baseball Hall of Famers Jackie Robinson and Pee Wee Reese. He served until his honorable discharge on June 21, 1947.

Upon his return from the service with GI Bill in hand, Dick went on to study education, math, science, and German at Grinnell College in Grinnell, IA. He worked as a waiter in the women’s dining hall to support himself beyond what the GI Bill covered. He was graduated from Grinnell in 1951 and initially taught high school math and coached girls’ basketball at Searsboro High School in Searsboro, IA.

Dick married Betty Louise Harshbarger on December 15, 1951, in the Grinnell College chapel. Subsequently, he and Betty moved to Bagley, MN, where Dick taught math at Bagley High School until 1959. Dick and Betty shared nearly eight years of marriage before her death in 1959, and were blessed with three sons: Steven, Peter, and Clark.

Dick was awarded a fellowship at the University of Michigan in 1957, took a year sabbatical from teaching, and earned his Master’s Degree in education and administration. He accepted a position teaching math at Hinsdale Central High School in Hinsdale, IL, in 1959 and moved his three sons and himself to Clarendon Hills, IL. Dick had ambitions of becoming a guidance counselor so began studying at night at Northern Illinois in DeKalb from 1962 until 1963, all while teaching at Hinsdale Central. Dick remained at Hinsdale Central until 1965 when he took a Guidance Counselor position at Hinsdale South High School, from which he retired in 1984.

In 1962 Dick met Shirley Marie Roe and they married in her hometown, Olathe, KS. Their son David was born in 1964. Dick and Shirley moved to Door County, WI, in 1988 and made their home in Sister Bay. Dick started working summers as a ranger and starter at the Peninsula State Park Golf Course where he made many friends and kept his finger on the pulse of Door County happenings before retiring again at 90.

Throughout his life, Dick was devoted to improving the lives of those around him. He worked as a mail carrier on Saturdays, taught summer school and tutored, and sold real estate as a means to supplement his teacher’s salary. As an educator and negotiator for the teachers’ union, he cared deeply for his students’ educations and fought for better insurance and compensation for his colleagues.

Like his father, Dick was a huge baseball fan, first of the Chicago White Sox and in his later years the Milwaukee Brewers. He also became a Green Bay Packers fan. Dick also loved gardening—tomatoes, begonias, and roses being favorites. His love of fishing was legendary and passed onto many in the family. He relished good food, barbecued tasty steaks, and he flirted with just about every waitress who ever served him a meal. Dick was patriotic, proud of his military service, and flew the American flag every day that the weather allowed.

He will be missed by his wife, Shirley, with whom he shared 59 years of marriage; four sons, Steven (Molly) Adams of Medina, OH, Peter (Lisa Brown) Adams of Buda, TX, Clark Adams of Lombard, IL, and David (Michael Frank) Adams of Freestone, CA; twelve grandchildren and seventeen great-grandchildren; and two sisters, Arlene Salzgeber of Wolfeboro, NH, and Karen Verr of La Grange, IL.

Dick’s life will be honored by family in Illinois at a later date.

Memorials may be given in his name to St. Jude’s Hospital, Wounded Warriors, or Sunshine House in Sturgeon Bay, WI.

Our family would like to express our heartfelt thanks to the staff of the Door County Medical Center in Sturgeon Bay and Scandia Village in Sister Bay for the kind and compassionate care given to Dick these past couple months. A special thank you goes to Mark and Val Bauldry for their many caring visits.

Casperson Funeral Home & Cremation Services in Sister Bay is assisting the Adams family. Expressions of sympathy, memories, and photos of Richard may be shared with his family through his tribute page at www.caspersonfuneralhome.com.