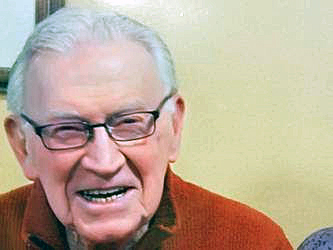 Richard Joseph Gadient was born in Davenport, Iowa on January 18, 1922. He met Bette Jean Horst on a blind date the summer before they attended Grinnell College in 1940. He enlisted in the U.S. Navy in February 1942, and he and Bette were married in 1944. He served as an officer on the USS Hickox, a Fletcher Class destroyer, in the South Pacific, which participated in major engagements from the invasion of the Philippines and Leyte Gulf through the Okinawa campaign. After separation from active duty in March 1946, he served in the Naval Reserve until September 1955.

After the war, he entered investment banking with Quail & Company in Davenport and worked in various sales and management positions with this and successor companies until September 1984, retiring as a vice president of Dain Bosworth in Minneapolis.

He served as a Commissioner of the Davenport Park Board for 18 years, enjoyed playing golf and squash racquets throughout his career, and traveling after retirement. He and Bette looked forward to spending summers on Lake Michigan in Sturgeon Bay, Wisconsin and winters on Sanibel Island, Florida.

Preceded in death by parents, Edward Gadient and Evelyn Cawley Gadient, brothers: James and Thomas, and sisters: Mary and JoAnne. Survived by his dancing partner of 73 years, Bette, and 6 children: Jeffrey (Denise), Stephen (Margaret), Michael, Douglas (Diane), Gregory (Clare), and Sara (Jay) Hubner . He was a beloved Opa to his 19 grandchildren, and 9 great grandchildren.

He was an attentive and dedicated husband and father, and took particular interest in the lives of his grandchildren and their children. He was admired by all and will be sorely missed.

Special thanks to the staffs of Good Samaritan Society Scandia Village, Home Instead, Unity Hospice, and Stella Maris Catholic Church for their dedicated service and compassionate care on Richard’s behalf. Memorials to these organizations preferred- no flowers please.

A memorial service will be scheduled in July at Scandia Village in Sister Bay, Wisconsin.

Online registration and condolences may be offered at www.cspersonfuneralhome.com