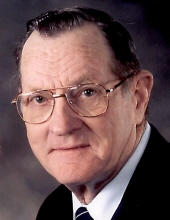 He was born on February 25, 1930 to William and Minnie (White) Murrock. Bob attended White Potato Lake Grade School and graduated from Coleman High School in 1947. He served his country in the Marine Corps during the Korean War. On April 30, 1955, Bob married Lorraine Kostreva in Chicago, IL.

He was a dairy farmer and also worked in construction, doing mason and concrete work. Bob was an active member of the Kalbes-Seewald American Legion Post #280 of Coleman and a member of Disabled Americans Veterans Post #45. He served as chairman of the Town of Beaver for six years and a Marinette County Supervisor for 20 years, serving on the Highway and Forestry Committee. Bob also served as president of the Wisconsin State Highway Committee Member Association and the Machinery Rental Committee. He served as an EMT on the White Potato Lake Rescue Squad for 11 years. Bob always offered his help to anyone needing help.

Bob was preceded in death by his parents; son, Ronald; brother and sister-in-law, Eugene (Sadie); and infant sister, Betty.

To honor his request, there will be no visitation or funeral. A memorial service will be held in Spring of 2017.

Rhodes-Charapata Funeral Home of Coleman is assisting the family with arrangements. Condolences may be offered at www.rhodescharapata.com or www.huehnsfuneralhome.com.