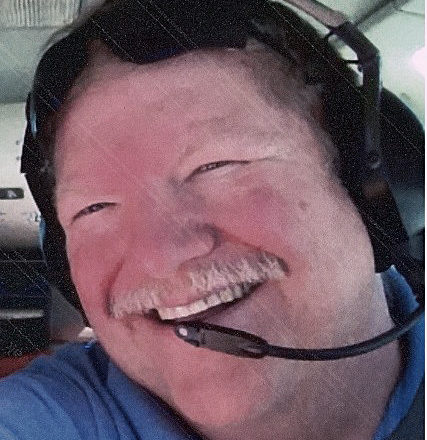 Robert Michael Vuksanovic, Jr., 59, of Sturgeon Bay, died peacefully in the comfort of his home, Ash Wednesday evening, February 14, 2018. He flew Home on Valentine’s Day with his favorite copilot (his wife), Catherine, at his side. Rob had been battling cancer the past three years.

He was born October 14, 1958 in Youngstown, OH, the son Robert Michael Vuksanovic, Sr., and Theresa Elizaebeth (Kratofil) Vuksanovic, Sr. Rob’s family moved to Wisconsin earlier in his life. At the age of 16, Rob began flying lessons while working as an aircraft fueler at Milwaukee Mitchell. He graduated from Greendale High School in 1976. Rob enlisted in the United States Air Force in 1977 and attended the United States Air Force Academy in Colorado. He was honorably discharged from the Air Force on August 4, 1978.

Rob began corporate aviation as a “hangar rat” and a commercial instrument pilot. He worked his way up to copilot for Congoleum Corp. Eventually, Rob became a Captain in a Hawker Siddley jet and flew internationally while taking correspondence courses at Embry-Riddle Aeronautical University in Daytona Beach, FL.

He met Catherine Dorothy Casselman in 1979, and surprisingly, she agreed to fly with him. They were united in marriage two years later on August 8, 1981 at Memorial Church in Greenfield. Together, Rob and Catherine soared the skies, both professionally and just for fun.

He became an airline pilot for Midwest Airlines in 1987, and by the next year, he was one of the youngest Captains for Midwest Airlines in DC9 aircraft at not even 30 years old. Rob flew with Midwest until their closing in October of 2009. He reinvented himself at age 51 as a certified airplane mechanic, aircraft inspector, and aircraft appraiser. Rob started his business, “Global Flight Research,” as he would say, “working with the aircraft side of the business.” In 2012, he flight assisted Helen Collins to a safe landing at the KSUE Door County Cherryland Airport, south of the city of Sturgeon Bay, and was interviewed over 100 times, some internationally.

He was preceded in death by his father.

Rob’s life will be celebrated with a memorial service held at 2:00 p.m. on Saturday, February 24, 2018 at Huehns Funeral Home in Sturgeon Bay with Fr. Carl Schmitt, of Corpus Christi Parish, officiating.

Visitation for family and friends will be held at the funeral home on Saturday, February 24, 2018 from 12:00 noon until the time of service.

Expressions of sympathy, memories, and photos of Robert may be shared with his family through his tribute page at www.huehnsfuneralhome.com.