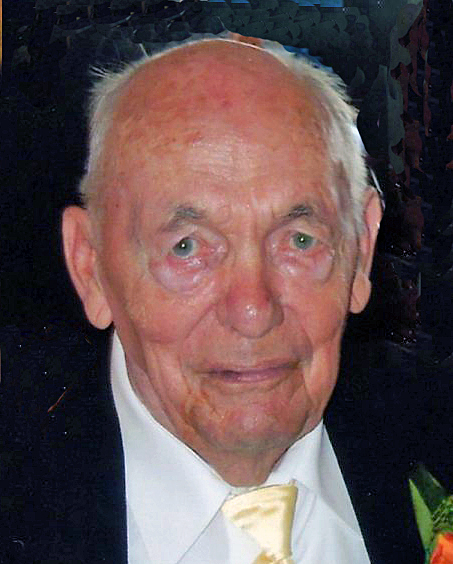 Bob attended Sturgeon Bay and Sevastopol High Schools where he was voted Prom King. He was lucky enough to have two class reunions to attend and still enjoyed their frequent lunches. After high school, Bob helped his father run the local Pabst distributorship and then joined the U. S. Air Force. He served from 1950-1953 and was stationed in Newfoundland. During his time of service, he played baseball on their team and was a standout player.

On July 23, 1955, he was united in marriage to Janet Marx at St. Joseph Catholic Church. They were blessed to have 3 daughters- Barbara, Roberta and Alison. Bob believed that “Precious” was the best looking girl in the county when he met her and never stopped feeling that way. Janet preceded him in death on February 13, 2013.

Baseball was truly one of the loves of his life both as a player and a coach. His God given talent in the sport was outstanding but he also loved coaching youth. Bob served as the Head Coach of the Sturgeon Bay Legion team for 10 years and taught great sportsmanship along with how to win games. He was extremely proud of his guys. He was a stand out in Door County League baseball as a player and also served as the coach of the Institute Cubs. For a time he also served as the league president. Bob was in the inaugural class to be inducted into the Door County League Hall of Fame.

Bob was everyone’s favorite bartender. He and Janet owned several establishments including the Y Inn (which they owned twice), Bob’s Corner Bar (now the Greystone Castle) and the 10th Inning Tap. You could also find him behind the bar at The Mill and Schartners On the Shore. A good friend stated that Bob could open a bar in the middle of Lake Michigan and people would row out to see him. He was a larger than life character.

Bob had a 20 plus year career as a car salesman. “Honest Bob” was the person so many people went to repeatedly for their vehicles. Never mind what the car was, they just loved to work with Bob and knew he would treat them right. He spent the most time working at Bill Boettcher with so many of his good buddies.

Bob’s interests included golfing at Idlewild, bowling, card playing and gambling. Las Vegas and namely Fitzgerald’s Casino were his home away from home. Until recent years, Bob ventured there 3-4 times a year. Anyone who traveled there with him had the time of their life.

Bob was also preceded in death by his parents, in laws Lloyd and Alice Marx and so many wonderful friends who went before him.

In lieu of flowers, please make donations in his name to the Door County Humane Society.

A mass of Christian Burial will be celebrated at St. Joseph Catholic Church at 11:30 am on Wednesday, January 13, 2016. Burial will be at St. Joseph Cemetery alongside Precious. Friends may call at Forbes Funeral Home in Sturgeon Bay from 2-7:00 pm on January 12 with a parish wake service at 7:00 pm and also again at St. Joseph’s Church prior to mass from 10- 11:30 am.

Thank you to all of his friends who have been so supportive. The family would also like to express our gratitude to the amazing staff at Pine Crest Village for their loving care. We all lost a wonderful friend, father and papa.