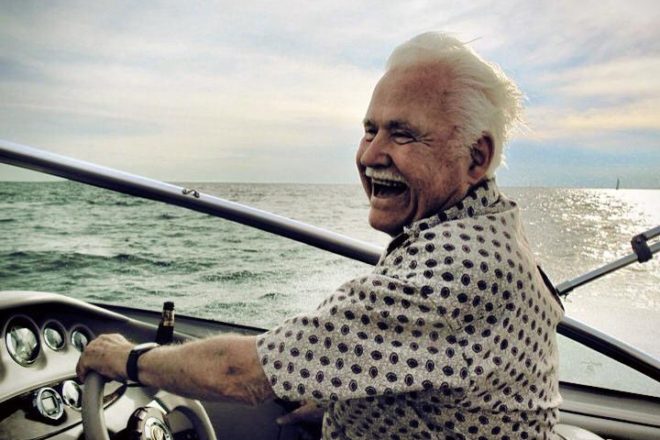 Bob was born in Sturgeon Bay, the son of the late Ranald and Ruby (Zettel) MacDonald. After finishing high school at Green Bay West, Bob served his country with the U.S. Army Airborne Division 11, stationed in Japan as a radio operator and a trained paratrooper. He was a proficient translator of Morse Code.

After his service, Bob worked at Platten Radio alongside his father, “Mac,” repairing radios and installing the radio wiring at City Stadium for the Green Bay Packers. He then worked his way into the field of paper engineering and quality control at Hoberg Paper Company and the Procter & Gamble Charmin Plant. In 1951, Bob eloped with his lifetime partner, Elaine J. Selissen, and made their home on the west side of Green Bay just blocks from his parents, sisters and aunt and uncle.

Bob and Elaine lived for their family, taking summer camping trips to Door County with their six kids in tow, and accompanied by extended family and friends. In 1975, he and his wife, Elaine, took a leap of faith by purchasing the Bayside Tavern and Cottages in downtown Fish Creek. Together with their children, they would turn the business into a Northern Door landmark, with Elaine’s business skills and Bob’s warm and quirky personality being their formula for success. Their customers became part of their huge extended family. Smilen Bob became known for his award-winning chili, which has become an iconic Door County food, and after 44 years of hard work and hospitable business, the Bayside Tavern that he was so proud of was named “Wisconsin’s Best Small Town Bar.”

Bob’s unique personality and mischievous grin have earned him the nickname “Smilen Bob,” which he often stated was a tough name to live up to, but he always managed to pull it off naturally.

In addition to his passion for the Bayside and Door County, he was an avid automobile enthusiast — buying, selling, tinkering on and showing his various vintage and collectible cars. Bob and Elaine founded the Bayside Corvette Club after Elaine purchased her first Corvette, prompting Bob to quickly follow suit. The club blossomed to include many close friends, and soon he and Elaine could be seen leading the pack in their matching, 50th-anniversary Corvettes.

He advocated for and supported historic preservation and truly loved nature, animals and listening to the birds — especially his beloved crows, which he fed daily with leftovers from the Bayside. He enjoyed motorcycling, his Harleys, camping, boating and snowmobiling. He also loved music of all kinds and was often seen dancing “The Smilen” (big grin, chin and elbows up, chest and butt out) to live music at the Bayside, helping Freddie Kodanko spin his polka records, and was always at the front of the crowd at every Steel Bridge Songfest and his son Pat’s live concerts.

Bob loved to be with his family and friends and was always there for his grandkids’ milestones, beaming with pride. He enjoyed his weekly breakfast meetings of the “Romeos” (Retired Old Men Eating Out) with some of his best buddies. He had a perpetual charm and wit that was magnetic up until the very end, and he made people feel special just by being in his company.

Preceding him in death were his parents, Ranald Isaiah and Ruby Muriel (Zettel) MacDonald; brother Bill McDonald; son William A. MacDonald; daughter Karen A. MacDonald; and his companion at Scand, Sharon Adams.

Funeral services will be held Friday, April 5, at the Fish Creek Catholic Church, with Rev. Frank Kauzlarich, pastor at St. Paul’s Lutheran Church of Juddville, officiating. Friends may call at the Fish Creek Catholic Church on April 5 from 10 a.m. until 11:45 a.m. Funeral services will follow at 12 p.m., closing with military honors. Burial will then take place at Blossomberg Cemetery in his beloved Peninsula State Park. A celebration of Smilen’s life will take place at Alexander’s, 1-4 pm. Out of respect for Smilen, the Bayside Tavern will be closed for business during the day of the service, reopening at 4 pm.

Smilen’s family would like to extend heartfelt thanks for the wonderful care provided by Scandia Village over the past four and a half years, to his many special friends for their continuous love and support, and to his doctors, nurses and aids who helped him to survive his many health issues.

A memorial fund will be established in his name. Casperson Funeral Home is assisting the family with arrangements. You may sign the online guestbook, offer condolences and share pictures at caspersonfuneralhome.com.