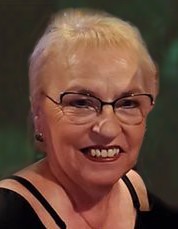 It is with heavy hearts that we announce the passing of Roberta Boyle, known as “Bert”, on September 24, 2020 at the age of 60. Bert was born in Sturgeon Bay in 1960 to Robert J. and Donna (Haen) Peterson. She graduated from Sevastopol High School in 1978.

Bert spent her early days after graduation working for her father at both RJ Peterson Plumbing & Heating and Valmy Laundry. She would often say I am the only female digging trenches for her dad one day then doing laundry for customers another. She was well known for her artwork at the Valmy Laundry and carried that talent to her last days by painting outstanding and meaningful pictures for her friends and family.

Bert lived in Sturgeon Bay until 1986 when she met the love of her life, Eric and moved to Florida to begin a new chapter. Bert and Eric were married in Door County in 1988 but spent their time in Florida.

Bert started her career in the retirement community in Florida as a housekeeper and worked her way up to a Supervisor of several departments with many employees. She was known to be tough to work for, but the life of the party after work! She made many friends and admirers through work and many were in touch with her until her passing and her family would like to thank them for that. Her and her husband spent their time hosting parties, enjoying their boat on the weekends, and keeping in touch with family “up-north”.

In 2011, Bert was diagnosed with Adrenal Cancer and from the moment she was told until her last breath, she fought very hard. She had many trials and tribulations during her illness, but she never gave up. We know the angels told her in her last days that it was time to be with God and join her family and friends who are in heaven.

The family will hold a small, private service this fall with intentions of a Celebration of Life next summer because of Covid-19.

“We would like to thank the many friends and family Bert brought together over the years. She had a mission to text her health status and would send funny memes to over 70 people each morning. Towards the end, she struggled to maintain the communications, but know that if you were on that list you were very important to her. She will be dearly missed by so many!”

Cards, condolences and donations can be sent to: Peterson Family, P O Box 6, Sturgeon Bay, WI 54235  The family intends to have a special memorial built in Bert’s honor.

Expressions of sympathy, memories, and photos of Bert may be shared with her family through her tribute page at huehnsfuneralhome.com.