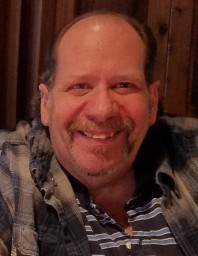 He was born July 30, 1955 in Waukesha, the son of Robert Edward Laak and Opal L. (Lane) Laak. Robin’s family moved to northern Wisconsin in 1965. He graduated from Phelps High School in 1974 and went on to study at Nicolet Area Technical College in Rhinelander. Robin moved to Sturgeon Bay a few years later and was initially employed with Dorco Manufacturing where he worked for a few years. He went to work in the shipyards at Peterson Builders Incorporated (PBI) where he was an electrician. Later on, Robin worked at Door Peninsula Winery and then Cherryland Brewery. He was most recently employed at von Stiehl Winery in Algoma.

Robin was an avid card player (cribbage, euchre, and sheepshead) and liked going to Las Vegas. He was good bowler and enjoyed bowling in league on Thursday nights in Sturgeon Bay. Robin even made it to several state bowling tournaments, and he would always helped organize his family’s bowling tournament. He also kept stats for local softball and baseball leagues in Sturgeon Bay. Above all, Robin loved spending time visiting with friends and community members.

Robin will be missed by his two sisters and one brother, Jane Hanson of New Richmond, Dawn Stickel of Hermitage, TN, and Keven (Kathy) Laak of Casco; three nieces and two nephews, Chelsie GawneMark [and her daughter and son, Jude and Cahill], Emily (friend, Sam Barnes) Stickel and Amy (Cody) Elder, and Mike (Kaizie) Laak and Dan (Jessica) Laak [and their daughter, Addison, and Jessica’s two daughters, Jacqueline and Brooklyn]; uncles and aunts; cousins; other relatives; and friends.

Relatives and friends are welcome to visit with Robin’s family in celebration of his life from 1 to 4 pm on Saturday, December 14, 2019 at Huehns Funeral Home in Sturgeon Bay with sharing of memories to be held at 3 pm.

“Our family would like to express our heartfelt thanks to the Door County Emergency Services first responders, the Door County Medical Center emergency staff, the Huehns family at Huehns Funeral Home, for all of your care given to Robin and our family. A special thanks goes out to Mark Tanck and his family for staying with Robin from that initial moment.”

Expressions of sympathy, memories, and photos of Robin may be shared with his family through his tribute page at huehnsfuneralhome.com.