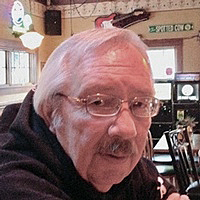 Roger A. Krause, of Fish Creek, 69, died peacefully March 8, 2018. He was born Aug. 1, 1948 in Sturgeon Bay to Alvin “Itsie” and the late, Janet Krause. Roger is survived by his children, Troy (Debi) Krause, Laura(Jason) and Sean Krause. Grandfather to Alyssa, McKenzie, Isabelle, Jason Jr and Nero. Roger is survived by his father Alvin Krause, his brothers Larry (Tammy), Gary (Debbie), Paul (Marcella) and his sisters Lynne (William), Sheri, Lee Ann and Karen. Further survived by many nieces and nephews. He is preceded in death by his daughter, Tara L. Krause and his mother, Janet Krause.

In honor of Roger’s wishes, a small service will be held at a later date. Arrangements are incomplete and will be announced by Casperson Funeral Home, Sister Bay.

A GoFundMe account has been established in Roger’s Memory by the family and it can be accessed at gofundme.com/roger-Krause-memorial-fund.