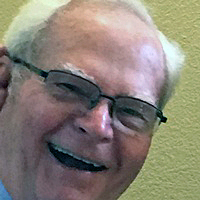 Roger M. Nulton, 86, died peacefully Sunday, August 27 at home in Egg Harbor while surrounded by his loving family. The son of the late Major General Henry G. Nulton and J. Eleanore Nulton of Hillside New Jersey was born on November 10, 1930. Roger and his wife Marilynn F Nulton celebrated their blissful marriage of 62 years this past June.

With a master’s degree in microbiology from Rutgers University, Roger was the Director of Operations and Technology in the Grocery Products Division for Kraft Foods in Chicago, Ill. for 35 years. Roger was the recipient of the Chairman’s award which recognized extraordinary business achievements in the areas of marketing, research and development. He retired in June 1992 when he and Marilynn started their new journey in life in Naples, Fla. where they spent their winters. As snow birds they flew the coop back up to their home here in Egg Harbor for the glorious summer and fall months.

While enjoying their time in Naples, they were active members of the Lakewood Country Club where Roger served on the board. He was often seen as a competitor on the tennis court and golf course. He and his brother Ed had enjoyed challenging one another with healthy competition. Roger also volunteered for the past 22 years at the Naples Community Hospital, and was dedicated to his daily workouts at the Naples Wellness Center.

Door County was Marilynn’s idea of paradise, and Roger was more than happy to make that happen for them. Once their home was built Roger had an enthusiasm to give back to the community. Over the past 22 years Roger had enjoyed the fellowship and camaraderie of the Door County Habitat for Humanity crew. Their dedication and talents provided a hand up to their neighbors. Once again Roger’s unyielding self-discipline to fitness and health had him at the YMCA seven days a week. He was greeted by many as he cruised Bay Shore Drive in his blue mini cooper convertible, floppy hat on, music cranked as he sang out “What A Wonderful World.”

Cruising the globe with friends and family enriched Roger and Marilynn’s lives as they experienced various cultures and people. Roger was an acquired taste! Those who knew him always felt his presence. He was a one of a kind guy and the world is a better place because of his generosity, humor, compassion and willingness to be there for others. We can’t say patient or flexible, but he was a great man.

Memorial service will be held Saturday, Sept. 9 at 10 am, Church of the Atonement Episcopal Church, 9390 Cottage Row, Fish Creek.

In lieu of flowers the family requests donations made in the memory of Roger Nulton to the Door County Habitat for Humanity Organization, 410 North 14th Ave, Sturgeon Bay, WI 54235.

Special heartfelt thanks to Dr. Richard Hogan and Unity Hospice for their compassion and support.