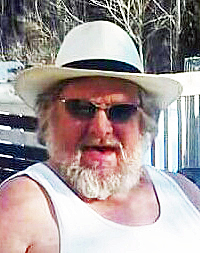 Ron graduated from Laona High School.  In 1977, he married his high school sweet heart Cynthia Kay Schneider of Crandon.  They lived in Rowlings, WY for a short time.  They moved to Sturgeon Bay where they had two boys.  They separated in 1980.

Ron loved the Badgers, NASCAR, Packers, bowling, BBQ and was an excellent cook on the smoker and grill.  He also loved being around family and friends.  After work, he liked to go to the Greystone with his buddies, but most of all Ron loved his family time.  His family was his world and his granddaughter Arielle was his pride and joy.

He is survived by five sons, Travis Bull, Trever Strege, Chris Bull, Josh Bull and Steven Bull; four brothers, Ricky Bull (his children, Andrew, Matthew, Jeffrey), Randy Bull, Rusty Bull (his daughter, Michelle Diverwey) and Bobby Kimball; many nieces and nephews; two step-children, Adam Goldman and Heather Goldman, and step-grandsonBraiden. He was preceded in death by his parents and the love of his life, Peggy Hermsen.