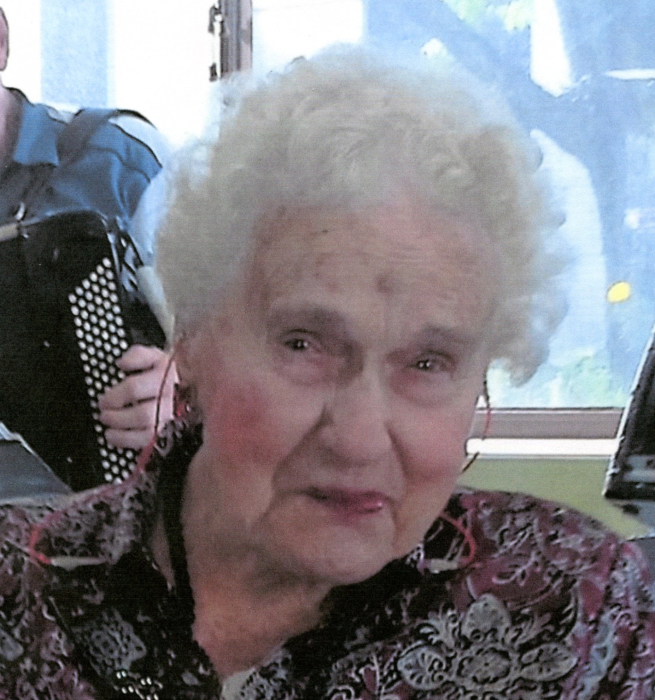 Ruby Catherine Elizabeth (Schulties) Dufek, formerly of Gardner, passed away on January 2, 2016.  She was born November 14, 1915, to the late John and Adeline Schulties.  Ruby just celebrated her 100th birthday.  In 1936, Ruby was united in marriage to Matt Dufek with whom she celebrated almost 60 years of marriage.  They farmed in Gardner for 35 years and retired to Maplewood where they operated a small hobby farm.

Ruby was a life-long member of Salem Ev. Lutheran Church where she was a member of the Ladies Aid, taught Sunday School, and played the organ for 50 years.  For many years Ruby gave organ, accordion, and piano lessons to approximately 150 area children as well as volunteering as an organist for chapel services at two local nursing homes.  Ruby enjoyed sewing, gardening and bowling until macular degeneration took its toll on her eyesight.

Funeral Services will be 11:00 a.m. Wednesday, January 6, 2016, at Salem Lutheran Church, Rev. John Seelman officiating. Burial will be in the Elton J. Schulties Memorial Cemetery.  Friends may call after 10:00 a.m. Wednesday at the church until time of services.  Memorials may be given to the Elton J. Schulties Cemetery in her name.  Forbes Funeral Home is in charge of arrangements.

The family wishes to thank the Bornemann Nursing Home in Green Bay for their kindness and excellent care.