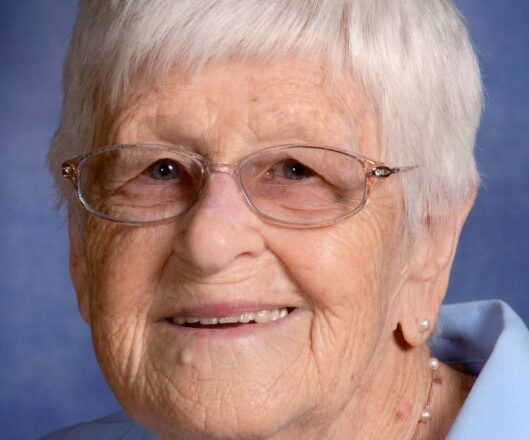 Ruth Marie Buschmann, 92, of Sheboygan and formerly of Sturgeon Bay, passed away at Azura Memory Care Assisted Living on October 28, 2020. She was born on July 20, 1928, in Sturgeon Bay to Frank and Marie (Neuville) Kohlbeck, the second of seven children. On May 28, 1949, she married Dale Buschmann at Corpus Christi Church.

Ruth was a dedicated wife and mother. She bravely left Sturgeon Bay with Dale and their first three young children in 1955 to start a new life when Dale joined the Milwaukee Police Department. They were blessed with two more children during their 25 years in Milwaukee and developed deep friendships with neighbors like the Kugel’s, Salzer’s and Becker’s that lasted even after Ruth and Dale retired back to Sturgeon Bay in 1980.

Ruth was an active member of Corpus Christi Catholic Church and St. Ann’s Society making quilts, doing mission work, and helping at the annual fall festival. She also was involved with the Neighbor to Neighbor Organization. Ruth was a woman of faith and the most important thing to her was her husband and her family. Ruth and Dale were happily married for 64 years when Dale passed away on June 7, 2013. Ruth enjoyed caring for her home and family, baking, gardening, and reading. Ruth was famous for her molasses cookies, homemade cinnamon rolls, pressure-cooked baked beans, Christmas cutout cookies, and for always having a freezer full of prepared food and desserts for family and friends who stopped by or came for the weekend. She enjoyed playing a competitive and often spirited card game of Hand and Foot with the family around the kitchen table. Ruth’s ready smile, warm heart, and generous spirit touched many people.

Special thanks to Ruth’s church friends, Cindy Beck and Linda Walczak, who visited Ruth weekly after Dale died. Your companionship and kindness were greatly appreciated. Also, special thanks to the staff at Azura Memory Care and Compassus Hospice Care in Sheboygan.

Due to the pandemic, Ruth will have a private service and burial at St. Joseph Cemetery, Sturgeon Bay.