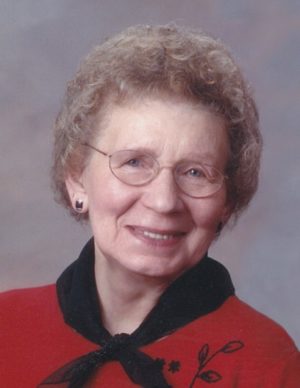 She was born Nov. 6, 1930 in Frankfort, Michigan, the daughter of Stewart Van Duro Jossart and Myrtle Janet (Burlingame) Jossart. Ruth’s family moved to Wisconsin in her early years, and she attended Minocqua High School where she graduated as valedictorian with the class of 1949. She was united in marriage to Emanuel William Fett on Aug. 5, 1950 at Fifth Avenue United Methodist Church in West Bend. They remained in West Bend for a couple years before moving to Woodruff, then Forestville, then into Carnot where they lived for many years, and then to Sturgeon Bay. Ruth and Emanuel were blessed with over 62 years of marriage. Emanuel passed away March 31, 2013.

Ruth took computer classes at Northeastern Wisconsin Technical College in Sturgeon Bay. She initially worked for U.S. Plywood in Algoma and then Bay Shipbuilding Co. in Sturgeon Bay for 10 years. Ruth returned to work for Algoma Hardwoods (formerly U.S. Plywood) where she was a logistics manager in her later years. She was a familiar face in the deli department at Tadych’s Econo Foods in Sturgeon Bay where she worked for over 20 years up until earlier this year. Ruth was someone who believed in working hard (and daily) and instilled that ethic in her family. In the few months of “off time” she had between her various places of employment, she found herself looking to go back to work as she had already taken care of all of her projects at home.

Ruth and Emanuel were members of Algoma United Methodist Church for over 50 years before becoming members of Sturgeon Bay United Methodist Church where Ruth was currently a member. She had a strong faith and loved her churches very much; Ruth was an active member and volunteer at both churches. She enjoyed square dancing with Emanuel as part of the “Cool City Square Dancers” in Algoma. Ruth was a member of the Maplewood and Forestville Homemakers Club and a 4-H leader with the Carnot Cloverleafs. She also liked tending to her flowers in the garden, cooking and baking, and sewing.

Ruth’s life will be honored with a funeral service held at 11 am, Saturday Dec. 1, 2018 at Sturgeon Bay United Methodist Church with Rev. David Leistra officiating. She will be laid to rest in Bayside Cemetery, beside her husband, Emanuel.

Memorials may be given in Ruth’s name for Sturgeon Bay United Methodist Church.

“Our family would like to extend a heartfelt thanks to staff at Door County Medical Center Skilled Nursing Facility and Unity Hospice for their care given to our mother.”

Huehns Funeral Home in Sturgeon Bay is assisting the family. Expressions of sympathy, memories, and photos of Ruth may be shared with her family through her tribute page at www.huehnsfuneralhome.com.