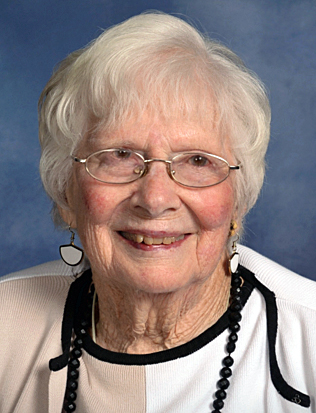 She was born Ruth Vand Veere Wagoner on December 29, 1917 in Chicago, IL, the daughter of Raymond and Anna (Nelson) Wagoner. Ruth went to live with her aunt in Paw Paw, MI where she attended and graduated high school. On June 15, 1940 Ruth was united in marriage to James Henry Fahey in Chicago. He preceded her in death.

She was employed as a legal secretary for many years with Attorney Herbert Johnson in Sturgeon Bay. She was a member of Hope United Church of Christ in Sturgeon Bay. Ruth had many friends at Hope and will be remembered there for wearing her crazy hats when making announcements. She enjoyed many friendships with people from all different backgrounds. Her many friends made her feel she lived a rich life.

Ruth loved her little cottage on the bay where she enjoyed many hours of watching the birds and other life on the water. Ruth had an appreciation for wildlife and nature. She loved animals and had a pet crow as a teenager and cats in later years, with Sienna her most recent, Ruth had been living at Woodside Assisted Living (part of Scandia Village) in Sister Bay since December 2009, and always liked visits from friends and their pets.

She will be deeply missed by her son, Jim (Susan Zeyher) Fahey of Sturgeon Bay; daughter, Victoria Fahey of Ubud, Bali, Indonesia; and friends.

Ruth was preceded in death by her parents and her brother, Harry Wagoner. Her life will be honored with a memorial service at Hope Church, Saturday, April 30, 2016. Visitation at 10:00 am, memorial service at 11:00 am with snacks & beverages to follow.

In lieu of flowers and in honor of Ruth’s love for animals, memorials may be given for the Door County Humane Society or Hope Church.

Ruth’s son, Jim, would like to thank her many friends who made her life so special.