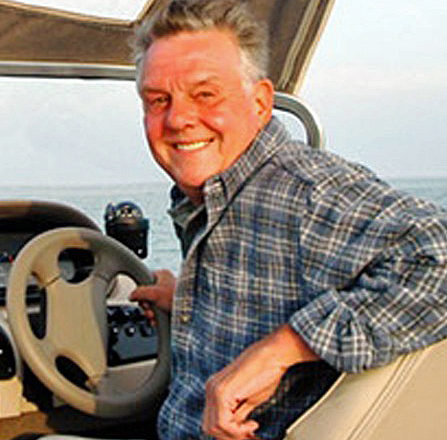 He was born February 7, 1941 to Samuel and Anna (Danko) Vana. After attending Lane Tech High School in Chicago, Sam enlisted in the United States Coast Guard where he served from 1960 to 1964 when he was honorably discharged. On February 10, 1962, Sam married Barbara E. May at St. Eugene Catholic Church in Chicago. She died in an automobile accident August 17, 2001.

Sam worked as a lithographer with Black Dot Inc. for many years in Chicago until his retirement. Soon after retirement, they moved to South Lake Michigan Drive where he has enjoyed these past 20 years. Following Barb’s death, Sam was a familiar, friendly face at our local Wal-Mart store where he worked at the checkouts.

Sam loved the outdoors, but in order of importance, he never lost his love of the water. He loved fishing and captaining his boat around the canal and the Bay of Green Bay. Great enjoyment was had in the solitude of his home, sitting for long periods looking into his woods, watching the deer and wildlife out of his kitchen windows. Those times enjoyed with family and friends were most important to Sam: watching plays at Peninsula Players, fishing with family and friends, bowling leagues, Packer games, chopping wood, using power tools, and Sonny’s Pizza.

Sam was preceded in death by his parents; dear wife, Barbara; and brother-in-law, Mike Piette.