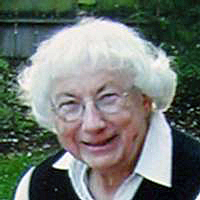 Shirley Virginia Ross was born on May 23, 1918 to Alexander and Lillian Ross of Edison Park, Chicago.

She graduated from Carl Schurz High School in 1936, and began working at the First National Bank of Chicago.

She loved vacations with her family in Northern Wisconsin and Florida, and flying with her cousin in an open air biplane.

Shirley and Arvid owned a dairy farm and cherry orchard until moving to California in 1963, where Shirley began work at Wells Fargo Bank. She also worked for the Clovis Chevrolet dealer and this group of employees all became special friends. Later Shirley worked with Arvid at the heating and air conditioning business that they owned.

In 1980, Shirley and Arvid retired in Ellison Bay and continued to travel throughout the United States and Europe.

Shirley is survived by son Ross of Ellison Bay, son Roger and daughter-in-law Karin of Washington, DC, and granddaughter, Jennifer, of Arlington, Virginia.