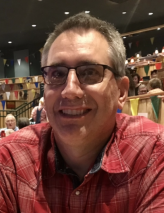 Steven Richard Haen, 51, of West Jacksonport, died at home on Sunday, August 1, 2021 with his family by his side after a two-and-a-half-year courageous fight with adrenal cancer.

He was born September 29, 1969 in Sturgeon Bay to Gary and Joyce (Flok) Haen. Steve grew up on a small beef farm near Valmy. He attended Saint Peter and Paul Catholic school in Institute and graduated from Sevastopol High School with the class of 1988. He then attended NWTC in Green Bay for wood techniques and graduated in 1989.

It was the summer of 1987 while working as a fish boiler at a fish boiling restaurant in the Village of Fish Creek that Steve met fellow coworker, Stacy Nicole Hasenjager. He was 17, and Stacy who went to Gibraltar was 15. They started dating in the fall that year, and five years later on October 3, 1992, they were united in marriage at St. John the Baptist Catholic Church in Egg Harbor (now Stella Maris Parish-Egg Harbor site) on a beautiful fall day. Steve and Stacy purchased their home in West Jacksonport just before the wedding and have lived there ever since. It was there that they expanded their family with two sons. Tyler was born on August 17, 1993, and Connor on February 7, 1996. Steve loved his family and the home they created. He was the happiest when he was at home working in his shop, doing yard work, remodeling the house, cooking or just hanging out watching TV. The four of them were a very close-knit family and enjoyed doing things together. Steve loved going to the big tractor pulls in Tomah or the off-road races up in Crandon. He enjoyed camping in the summer and snowmobiling with the neighbors in the winter. Steve loved spending time in the family woods hunting or cutting firewood. He enjoyed helping his neighbor, Billy, on his farm. Steve was happy this past spring that he felt well enough to help him with field work. He also enjoyed trips to Pigeon Forge, TN where he and Stacy first went on their honeymoon. Steve loved renting a cabin high up in the mountains and spending time together, appreciating the area and all the beauty of the mountains.

He enjoyed making custom furniture for customers and family. Steve was proud to say he worked at all three shipyards in Sturgeon Bay and loved to talk about it when asked what he did for a living. He first started his career at PBI, then he spent 17 years at Palmer Johnson Yachts. In 2015, Steve joined Fincantieri Bay Shipbuilding as a Shop Planner and enjoyed his job until June 2020 when his illness got in the way of him doing what he loved. He was very thankful they allowed him to safely work from home that last year as he went through treatments and then the pandemic started. Steve truly enjoyed his job and coworkers and missed going to work every day.  He was a hard worker with a strong work ethic. If Steve didn’t know how to do something he would find a way to learn. There wasn’t much he didn’t know how to do.

Steve will be missed by his loving wife of almost 29 years, Stacy; sons, Tyler and Connor, all of West Jacksonport; his mom, Joyce Haen of Sturgeon Bay; his younger sister, Kelly (Jeff) Walenski [and their children/Steve’s godchildren, Alyse and Grant], all of Green Bay; niece, Evelyn Darden and nephew/godson, Elijah Darden of Naperville, IL; parents-in-law, Leon and Rosemary (nee Robertoy) Hasenjager of Fish Creek; Stacy’s brothers (and sisters-in-law), Corey (Laura) Hasenjager of Green Bay and Troy (Cindy) Hasenjager [and their children, Kenzye and Chase] of Sturgeon Bay; his beloved fur companions, 7-month-old chocolate lab, Riley and cats, Billy and Charlie; and many aunts and uncles; cousins; friends.

He was preceded in death by his dad, Gary Haen (March 26, 2018); grandparents Lawrence “Shorty” and Evelyn (nee Sawyer) Haen and Urban “Bud” and Delores (nee Gray) Flok; and his beloved black lab, Lexi who was always by his side until she passed away in August 2020.

Steve wanted to make sure we thanked DOOR CANcer, the Unity Hospice nurses, especially nurse Heather that was with us that day; his neighbor and friend, Chuck Nelson who never failed to call or stop in. He always said he couldn’t have asked for a better friend; Billy Bley, Jake Schartner, Troy Gigstead, Ryan Wery, Darin Ploor, Steve Bosman, and many more friends and coworkers for your friendship, calls and visits; special uncles, Robert and Joe Haen for always being there. Thank you all for cheering him up when he needed to get his mind off his illness. He wanted you to know he appreciated each and every one of you.

“Steven, we miss you so much already. It’s hard to believe you’re really gone. You’ve left a huge hole in our lives, and it hurts to know we must go on and continue this life without you. You fought so hard for us right up to the end. Showing and teaching us how to do the things you always took care of. The remodeling projects you did even when you weren’t feeling well. It was your way of taking care of us long after you were gone. We know you’re watching over us. Until we meet again. We will love you forever!” -Stacy, Tyler, and Connor

Steve’s life will be honored with a memorial service held at 7:00 p.m. on Friday, August 6, 2021 at Huehns Funeral Home in Sturgeon Bay with Fr. Thomas Farrell, of Stella Maris Parish, officiating. He will be laid to rest in St. Mary’s of the Lake Cemetery in Baileys Harbor.

Visitation for family and friends will be held at the funeral home on Friday from 3:00 p.m. until the time of service.

Expressions of sympathy, memories, and photos of Steve may be shared with his family through his tribute page at www.huehnsfuneralhome.com.