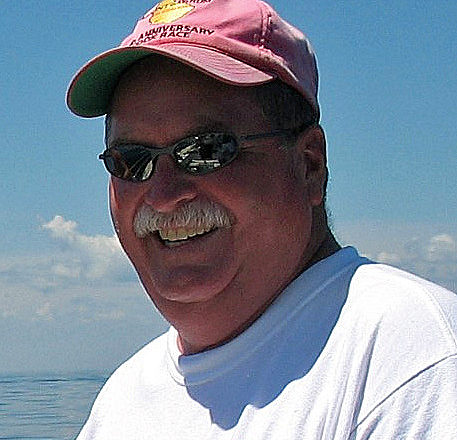 He was born in Lombard, Illinois to James and Alice Keys on September 29, 1956. Stuart spent his childhood in Wheaton, Illinois where he graduated from Wheaton North High School in 1974. Later that spring he moved with his family to Door County living in a home on Sherwood Point Road on the shore of Green Bay. Stuart spent two years studying architecture at Kansas State University in Manhattan, Kansas. In 1987, Stuart married Shawn Clarke before they moved to California. Their son, Sam, was born in 1991.

In Sturgeon Bay, Stuart had worked for Palmer Johnson, and his father’s architectural firm. While in California, he had worked as project manager for a construction company.  In 1998, Stuart and Sam moved back to Wisconsin and lived in De Pere. Stuart worked for various construction companies before retiring as Vice President and estimator at Schmidt Construction Company in Sheboygan four years ago to follow his love of sailing which began in 1967.

Stuart was preceded in death by his father, James Keys; uncle, Samuel Keys; aunt, Helen Beam; and other relatives.

Funeral services were held May 18, 2016 at Huehns Funeral Home in Sturgeon Bay with Rev. Philips Sweet officiating. Burial will be in Bayside Cemetery.

“Thousands of miles sailing and racing on the ocean and Great Lakes solo and with his son Sam experiencing tremendous success, breezes taking him to places most only dream of including memorable Bermuda and Brazil. I will miss you forever, Dad.”

Guestbook signing, condolences, and sharing of memories may be offered at www.huehnsfuneralhome.com.