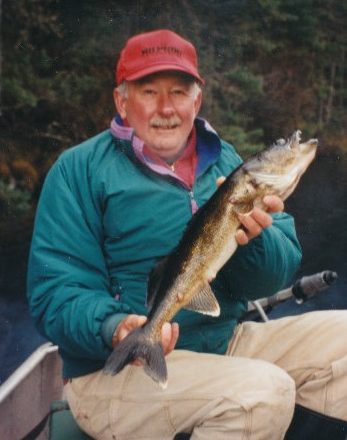 Stuart was born in Oshkosh, Wisconsin, to Elmer and Margaret (Affeldt) TerHorst. He grew up in Winnebago, Wisconsin. It was as a young boy on the shore of Lake Winnebago that he developed his love of the outdoors, fishing and hunting.

He was educated in Oshkosh public and private schools, graduating with a bachelor’s degree from UW-Stevens Point. He joined the Wisconsin Army National Guard in 1959 and served for 20 years. He attended the Wisconsin Military Academy as part of his training and rose to the rank of captain, retiring in 1979. He was a member of the American Legion Post 306 in Green Lake, Wisconsin.

Stuart married Margaret Bachhuber on Aug. 25, 1962, in Wausau, Wisconsin. Their daughters, Kathryn and Heidi, were born in Stevens Point as he finished his education and then was employed by Sentry Insurance in the claims department.

The family moved to Door County in 1977 as co-owners of the Hillside Inn in Ellison Bay. After leaving the Hillside Inn, he built their home in Ellison Bay with skills he had acquired from renovating homes in earlier years. A log cabin in Princeton, Wisconsin, followed; the woods there were a hunting haven for him.

In 1982, Stuart passed the U.S. Coast Guard captain’s license exam. Stone Wing Charters began in 1982, and for the next 32 years was a successful charter fishing business.

Stuart’s love of the outdoors, fishing and hunting and his family were what anchored him.

He is survived by his wife, Margaret; his daughters, Kathryn TerHorst (Walter McFarland) [and their son, Maxwell McFarland] of St. Paul, Minnesota, and Heidi Rocke [and her sons, Eliason Rocke and Jensen Rocke] of Neenah, Wisconsin. A brother, Courtney TerHorst of Neenah, Wisconsin, also survives.

A late-spring memorial service will be held in Ellison Bay.

Memorials may be given in Stuart’s name to the American Cancer Society (cancer.org) or the American Legion Post 306 (P.O. Box 448, Green Lake, WI 54941 or greenlakelegion.org).

Thank you to Scandia Village, Sister Bay; Unity Hospice, De Pere, Wisconsin; and Saint Elizabeth Hospital, Appleton, Wisconsin; for their care of our husband, father and grandfather in his final days.

Casperson Funeral Home and Cremation Services of Sister Bay is assisting the family. Expressions of sympathy can be shared with Stuart’s family through his tribute page at caspersonfuneralhome.com.